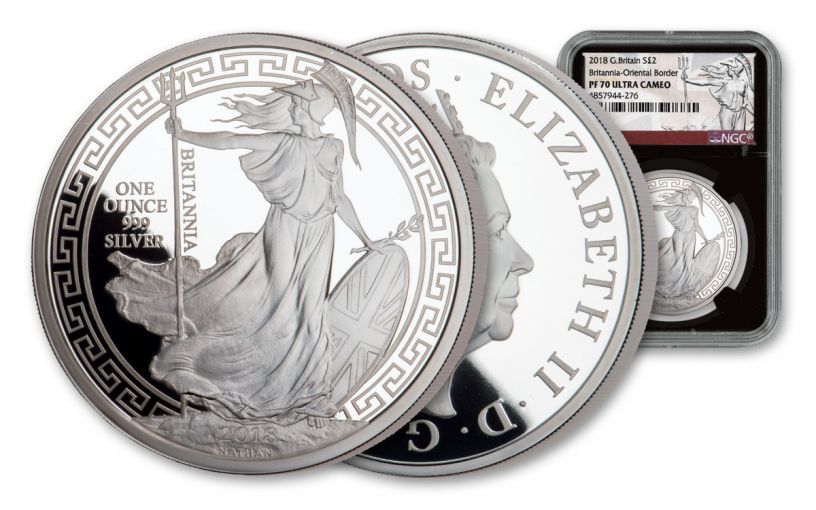 Availability: Call-In Only
This item is only available on a Call-In basis. Please call 1-800-510-6468 to speak to a representative.
Item #
338886
Add to Wish List Add to Wish List Wishlist is for registered customers. Please login or create an account to continue. Add to Compare

Now, to commemorate both the symbolic history of Britannia in Asian commerce as well as the vital role her namesake coin serves there today, the British Royal Mint has introduced a brand new one-ounce Silver Britannia Proof Coin for 2018, featuring a gorgeous border inspired by the artistic patterns of East Asia! Each one-ounce coin features the award-winning 1987 Britannia design surrounded by an ornate Oriental border that was inspired by the Chinese-themed rooms at Buckingham palace and the Royal pavilions in Brighton. The portrait of her Royal Highness Queen Elizabeth II on the coin’s obverse has also been enhanced with a new guilloche background. In addition, your 2018 Great Britain Britannia Oriental Border One-Ounce Silver Proof has been graded by the Numismatic Guaranty Corporation (NGC) as being in perfect Proof-70 Ultra Cameo (PF70UC) condition, a distinction that means your perfectly-graded proof will have ZERO imperfections – showing all features and fields exactly as the engraver and mint intended!