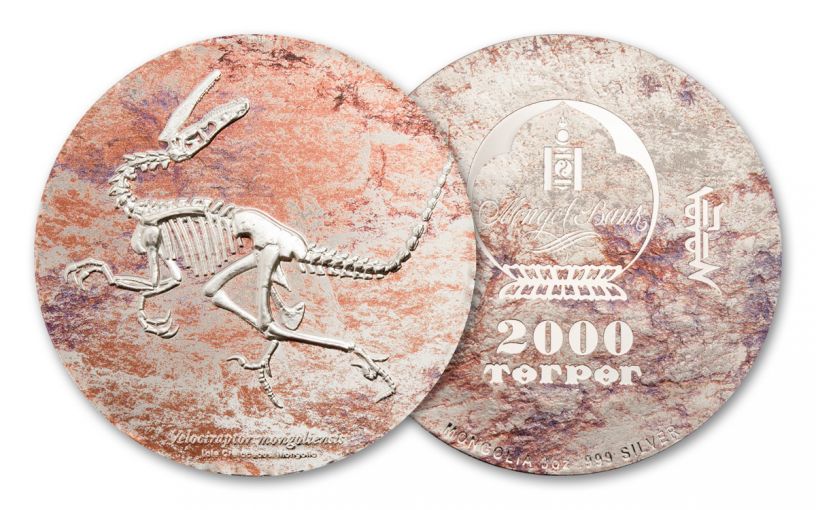 Availability: Out of Stock
This item is currently Out of Stock. Please sign up to be notified if this product becomes available.
Item #
331948
Add to Wish List Add to Wish List Wishlist is for registered customers. Please login or create an account to continue. Add to Compare

Capture the Eerie Beauty of an Ancient Dinosaur Preserved in Silver

Many commemorative coins capture relatively recent history, but the 2018 Mongolia Silver Velociraptor coin reaches back more than 70 million years ago for its inspiration! Celebrating the speedy carnivore that lived during the late Cretaceous Period, this coin is a sight to behold. Thanks to the creative use of new minting technology, selective colorization, and ingenious designs, the coin looks more like an actual fossil than a legal-tender coin!

Struck in three ounces of 99.9% silver by CIT on behalf of Mongolia, the Silver Velociraptor Proof-Like coin is the latest release in the Evolution of Life coin series of paleontologically themed coins. And at 65 mm in diameter, this coin puts its large surface area to good use. Thanks to the mint’s Smartminting© technology for striking coins in high relief, the raptor’s skeletal remains vividly stand out from the coin’s surface. The addition of colorized red rock finishes add to the effect that you’re holding a real fossil in your hands!

Unlike the over-sized monsters from the Jurassic Park films, velociraptors actually stood only a few feet tall and fossilized remains confirm the presence of feathers. One thing the films did get right about this little devil was its razor-sharp teeth– the beast’s jaw was lined with more than two dozen widely spaced teeth on each side, each more strongly serrated on the back edge than the front. Equally as menacing were the creature’s back feet. Like other dinosaurs, velociraptors had feet with three digits, but this little monster’s second digit was retracted off the ground and featured a distinctive sickle-shaped claw that it used to capture, hold and disembowel its prey – usually other sheep-sized dinosaurs.

Velociraptors lived in what is now Mongolia and northern China. The first velociraptor fossil was discovered in the Outer Mongolian Gobi Desert in 1923 by Peter Kaisen during an expedition sponsored by the American Museum of Natural History. The raptor gets its name from the Latin words for “swift seizer.” The name is apt as paleontologists estimate that velociraptors could run up to 40 miles per hour for short bursts and jump as high as 10 feet straight up into the air.

Mongolia’s Evolution of Life series is a unique and exceptionally well-executed series celebrating our world’s prehistoric beginnings, and the 2018 Mongolia Velociraptor Colorized Three-Ounce Silver Coin carries on the tradition well. Also makes a perfect gift for a son, daughter or any youngster captivated by dinosaurs. Add one to your cart today!

Mongolia’s 2018 Velociraptor Colorized Three-Ounce Silver Coin is from a mintage of just 999 coins. Get yours at GovMint.com before this offer becomes extinct!