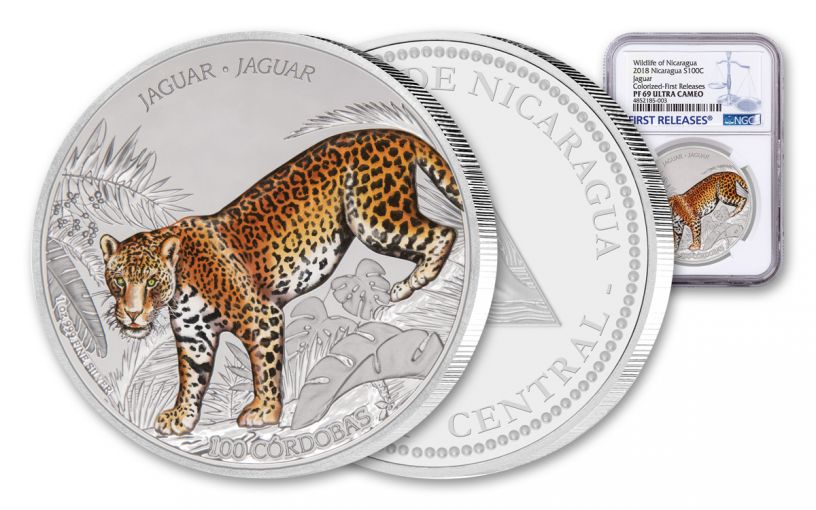 Availability: In Stock
This item will ship within 2 business days.
Item #
335604
Review this product
Add to Wish List Add to Wish List Wishlist is for registered customers. Please login or create an account to continue. Add to Compare
Complete your collection with one of these:
Product Description

The word “jaguar” conjures up a wide variety of colorful images. For some, it’s the legendary moniker for one of the most popular sports cars of all time. For others it’s the mascot for a host of different sports teams. But now, it’s also the first subject of an exciting new coin series that pays tribute to the exotic animals of Central America!

The very first release in the Wildlife of Nicaragua coin series, this legal-tender one-ounce silver coin depicts the jaguar, the largest cat species in the Americas. Struck by the prestigious New Zealand mint on behalf of the Central Bank of Nicaragua, the jaguar on this superb coin has been fully colorized so you can see every one of its spots as well as the different blend of colors in its tawny coat as it stealthily prowls through its native jungle habitat.

Your 2018 Nicaragua Jaguar One-Ounce Silver Colorized Proof has been graded by the Numismatic Guaranty Corporation (NGC) to be in near-perfect Proof-69 (PF69) condition. In addition, NGC has certified it as a First Releases (FR) coin, meaning that it was among the first struck by the mint and was verified within the first 30 days of issue. It will also be accompanied by a Certificate of Authenticity written in both English and Spanish.

The jaguar is a well-muscled animal with short, stocky limbs that help make it extremely adept at climbing, crawling or swimming. And, while it resemble s the leopard, It’s sturdier and heavier with larger and fewer rosettes. The apex predator of Central and South America, jaguars use their spots for camouflage in the dappled light of its forest habitat.  They’re also solitary cats that prefer to stalk and ambush their prey rather than chase down their meals. According to ancient Central and South American folklore, the jaguar was a symbol of power and strength. Both the Mayans and the Aztecs considered it a scared animal that was revered during religious ceremonies. The jaguar’s name comes from the word “yaguara,” meaning “beast of prey” which was adapted by early Portuguese explorers into the word we know today.

With a limited edition of just 5,000, the time to obtain one of these colorized jaguar proofs is now. Wildlife-themed coins – especially the first coins in a new series – are always popular among collectors. Order yours today because these jaguars will be awfully tough to spot in the future!

Don’t miss your chance to get the first coin in this series. Coin collectors, silver stackers and wildlife enthusiasts will all be on the prowl for it. Add one of these 2018 Nicaragua Jaguar One-Ounce Silver Colorized Proofs to your cart today!