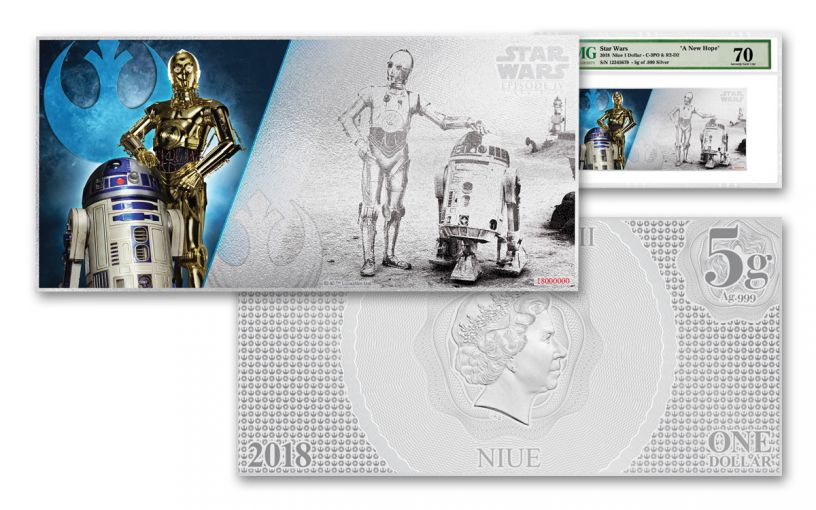 Availability: In Stock
This item will ship within 2 business days.
Item #
332369
Review this product
Add to Wish List Add to Wish List Wishlist is for registered customers. Please login or create an account to continue. Add to Compare
Complete your collection with one of these:
Product Description

Star Wars debuted in 1977, and it has mesmerized movie goers of all ages since then. From an intriguing storyline that puts a stark contrast between good and evil together with dynamic characters who cross the line between the two to special effects and music that draw “oohs and aahs” from audiences, the series offers something for everyone. The serious nature of the storyline calls for comic relief, which is exactly what R2-D2 and C-3PO offer. The duo are among just a handful of characters that have appeared in every Star Wars movie. That makes this 2018 Niue five gram Silver R2-D2 & C-3PO Foil Note a must have for collectors who have an affinity for one of the most famous movie series of all time.

Compelling characters are among the things that make Star Wars so appealing for so many fans. Most of those characters are series, constantly speaking of good and evil, “the Force,” training, discipline, and war, but R2-D2 and C-3PO are more like Abbott and Costello than Churchill and Roosevelt. The sassy R2-D2 plays off of the pompous C-3PO in a way that makes viewers young and old chuckle even as the rest of the cast engages in an ongoing battle for galactic control. Whether you are an avid Star Wars fan or simply love the satirical sideshow of two of Hollywood’s most famous robots, order this 2018 Niue five gram Silver R2-D2 & C-3PO Foil Note at GovMint.com today!