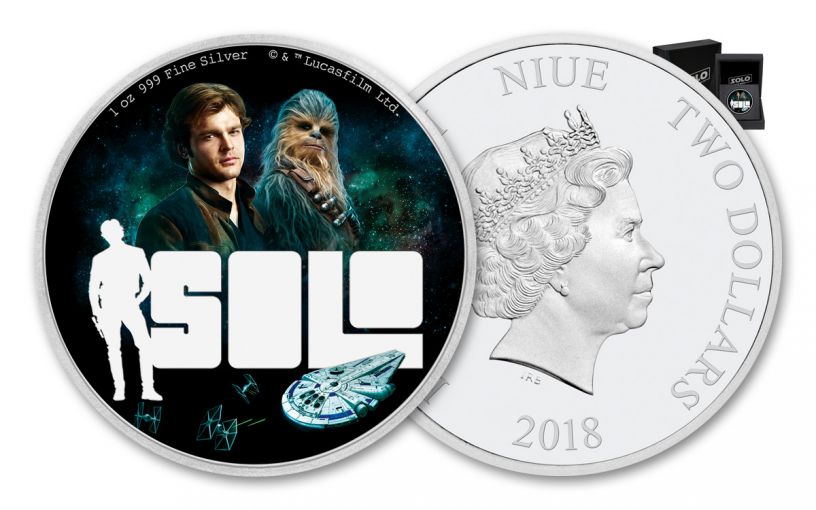 Availability: Out of Stock
This item is currently Out of Stock. Please sign up to be notified if this product becomes available.
Item #
334898
Add to Wish List Add to Wish List Wishlist is for registered customers. Please login or create an account to continue. Add to Compare

In a Familiar Universe, the Origin of the Galaxy’s Most Likeable Rogue

Everyone knows the back story to Luke Skywalker and Princess Lea in the Star Wars Saga.  Darth Vader and Obi-Wan Kenobi? Yup, we know all about them, too. But what about Han Solo and Chewbacca?  We’ve known next to nothing about their origins – or at least we didn’t until the May 2018 release of Solo: A Star Wars Story.

Starring Alden Ehrenreich as a young Han, the film also features new characters to tell Han and Chewbacca’s story. Woody Harrelson play’s Han’s mentor Tobias Beckett and Donald Glover portrays a young Lando Carlrissian. The film is directed by Ron Howard and answers all the questions like how Han and Chewbacca met, how they got the Millennium Falcon as their ship and how they got their start in the smuggling business.

To commemorate this monumental event in the Star Wars universe, the New Zealand Mint has released this 2018 Niue 2 Dollar 1-oz Silver Solo: A Star Wars Story Proof! Minted in one ounce of 99.9% silver, this legal tender proof shows a young Han Solo and Chewbacca along with the Millennium Falcon being pursued by a trio of Imperial Tie Fighters in vivid color. Overlaid in white is the film’s logo. It’s like at a movie poster on a spectacular officially licensed coin!

Your proof will come secured inside special Solo: A Star Wars Story-themed mint packaging, along with a branded certificate of authenticity. Only 10,000 of these proofs will be minted worldwide. That’s an extremely small mintage for any popular silver proof series – and ridiculously low for a Star Wars-themed coin that appeals to millions of fans around the world!  Don't wait too long for your chance to own this unique Solo: A Star Wars Story proof – add it to your collection today!

Own a unique piece of one of the most successful franchises in entertainment history by ordering the 2018 Niue Solo: A Star Wars Story 1-oz Colorized $2 Gem Proof at GovMint.com today!