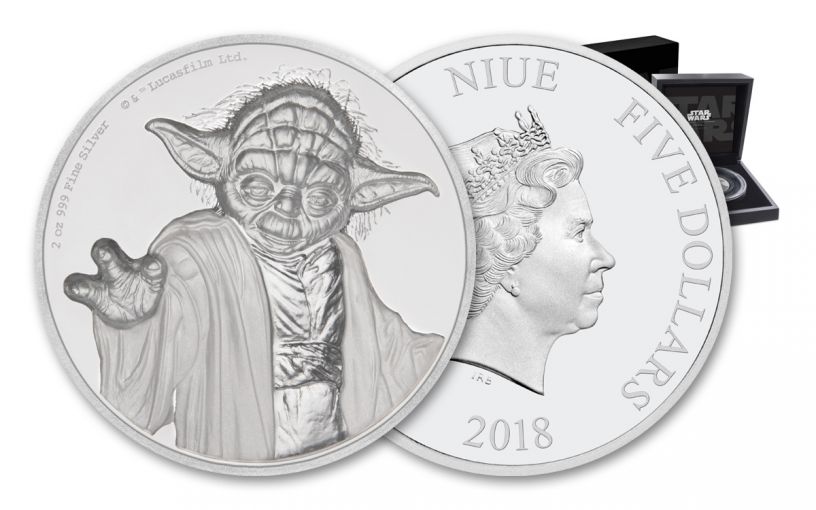 Availability: In Stock
This item will ship within 2 business days.
Item #
332111
Review this product
Add to Wish List Add to Wish List Wishlist is for registered customers. Please login or create an account to continue. Add to Compare
Product Description

May the Force Be with You

When it comes to unforgettable movie characters, none can surpass the ugly little creature whose fighting skill, ability to use the Force, and, most of all, his wisdom captured the hearts of generations of Star Wars fans. Committed unwaveringly to goodness, the character spoke softly and with unique word patters that forced the viewer to hone in on his words, which were always filled with wisdom that he had acquired throughout his nearly 900-year life. Although small in stature, he successfully used the Force to complete any number of tasks, not the least of which was raising the X-wing from the Dagobah swamp. This 2018 Niue two ounce Silver Star Wars Yoda Ultra High Relief Proof depicts the wily character using the Force.

Collectors often choose coins because a person, place, thing, or idea represented has special meaning to them. Because of the wide range of interests that people have, this usually means that the audience of particular coins is somewhat limited. In this case, though, the coin is an attractive option to a much wider audience, as it not only appeals to Star Wars enthusiasts but also to anyone, collector or not, looking for inspiration to achieve what seems impossible to others. With a limited mintage of just 5,000 pieces, this 2018 Niue two ounce Star Wars Yoda Ultra High Relief Proof will not be available for long, so order yours at GovMint.com today!