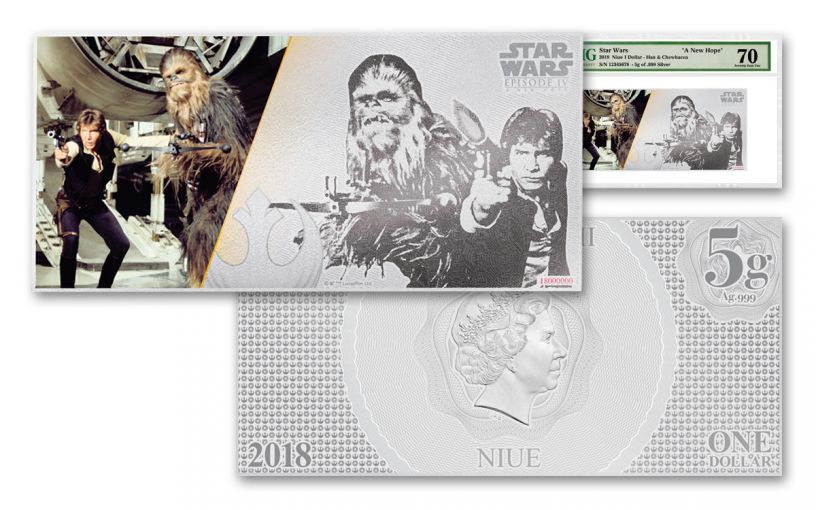 Availability: Out of Stock
This item is currently Out of Stock. Please sign up to be notified if this product becomes available.
Item #
334793
Add to Wish List Add to Wish List Wishlist is for registered customers. Please login or create an account to continue. Add to Compare
Product Description

Star Wars is now and will forever remain one of the most successful movie series in cinematic history. While there are many reasons for its virtually unparalleled success, one of the greatest among them is that the variety of characters to which different people can relate. One of those is Han Solo, whom George Lucas characterized as “a loner who realizes the importance of being part of a group and helping for the common good.” Chewbacca, following Wookie tradition, spent his life defending Solo after Solo refused an order to kill him. This Niue 2018 five gram Silver Han Solo & Chewbacca Foil Note immortalizes the characters in 99.9% fine silver.

Han Solo is one of the most relatable characters in the entire Star Wars franchise. Starting out as an Imperial officer, he refused an order to kill Chewbacca and then became a smuggler, an opportunist without a proverbial dog in the fight between the forces of good and evil. Asked to help the Rebel Alliance by Luke Skywalker. He declined but later had a change of heart. In a series that is characterized by clear cut good vs. evil, Solo was conflicted between his own interests and the common good. If you are a Star Wars fan, don’t miss your chance to own this 2018 Niue five gram silver Han Solo & Chewbacca Foil Note!