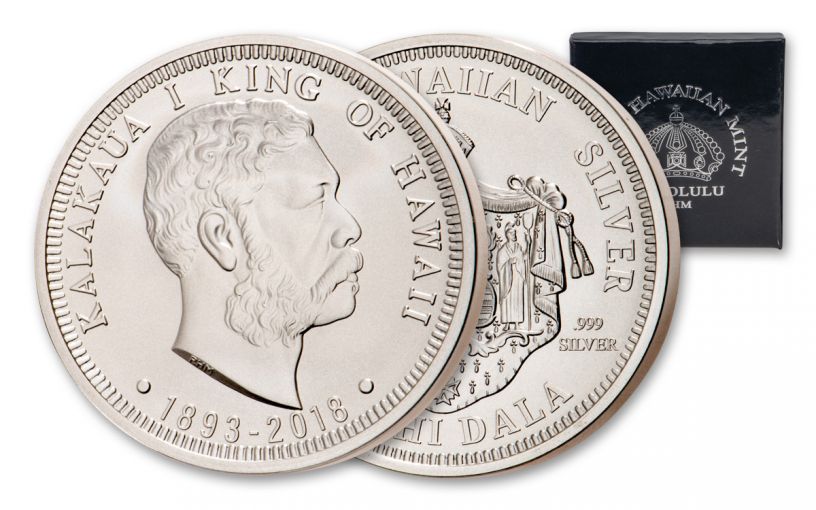 Availability: Out of Stock
This item is currently Out of Stock. Please sign up to be notified if this product becomes available.
Item #
334923
Add to Wish List Add to Wish List Wishlist is for registered customers. Please login or create an account to continue. Add to Compare

The Last King of Hawaii

In 1883, the San Francisco Mint struck a Kingdom of Hawaii Dala coin featuring the effigy of King Kalakaua I, the last king of Hawaii (though not the last ruler – that title belongs to his sister, Queen Liliuokalani, who was overthrown by the United States). Years later, these coins could even be exchanged for U.S. dollars! Now, to mark the 125th anniversary of Hawaii becoming a U.S. territory, the Royal Hawaiian Mint has issued a special Akahi Dala bearing the 1883 design.

The historic design is minted in a full ounce of highly-pure 99.9% fine silver. In addition, your King Kalakaua One-Ounce Silver will come in gleaming Brilliant Uncirculated (BU) condition as sharp and crisp as the day it left the mint! It will also come displayed in an official presentation box from the mint.

King Kalakaua reigned from 1874 until his death in 1891. While he successfully restored Hawaiian cultural traditions that had been suppressed for decades, he has ever since been known as the “Merri Monarch” for his legendary love of music, parties and fine dining. In fact, it was during his reign that the hula dance made a resurgence after being forbidden for decades by Christian missionaries.

These 125th anniversary proofs will be struck for only a limited time, so if you don’t want to be left waving Aloha as these silver commemoratives sail away, you had better click one to your cart right away!