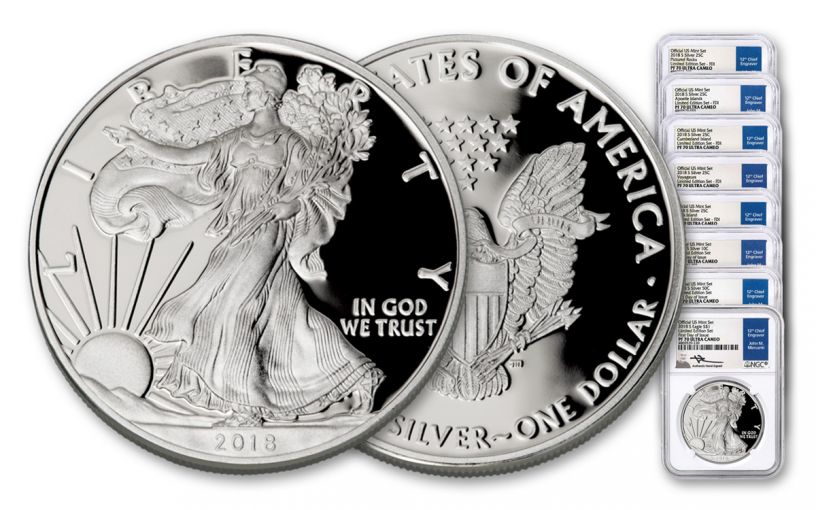 Availability: Out of Stock
This item is currently Out of Stock. Please sign up to be notified if this product becomes available.
Item #
342269
Add to Wish List Add to Wish List Wishlist is for registered customers. Please login or create an account to continue. Add to Compare

America’s Best Coins of 2018 – Struck as Silver Proofs All in One Set!

Each year, the United States Mint’s Proof and Uncirculated coin sets make their way to hundreds of thousands of collectors. Released soon after those two sets make their debut is the annual Silver Proof Set. Now, the Mint has just released its Limited Edition Silver Proof Set that includes silver and only silver coins. What’s more, it also features the inclusion of the collector version of this year’s 2018 Silver Eagle – which was not available in any of the earlier sets!

The 2018 United States Mint Limited Edition Silver Proof Set™ is without a doubt one of the most impressive silver proof sets in the world. It contains eight coins expertly crafted in 90% fine silver with stunning proof finishes struck by the famous San Francisco Mint. For fans of American coinage this silver proof set is the peak of gleaming perfection!

In addition, since each set is struck in proof condition at the San Francisco Mint using specially polished dies and selected planchets, all of your proofs will feature the "S" mintmark. As a further testament to their quality and beauty, each has been certified by the Numismatic Guaranty Corporation (NGC) as being perfect Proof-70 Ultra Cameo (PF70UC) condition, a distinction that means your perfectly-graded proofs will have ZERO imperfections – showing all features and fields exactly as the engraver and mint intended!

In addition, your proofs will also be certified as First Day of Issue (FDI) coins by NGC, meaning they were received by NGC or an NGC-approved depository by the release date or on the business day within 24 hours of the official release date. Plus, each proof comes sonically sealed in an acrylic holder with a special label featuring the personal signature of John Mercanti, the U.S. Mint’s 12th Chief Engraver!

All silver all the time; secure the United States Mint Limited Edition 2018 Silver Proof Set. Get all five 2018 quarters, the half-dollar, dime AND this year’s Siler Eagle with the “S” mint mark – all in flawless First Day of Issue condition! Order yours now!