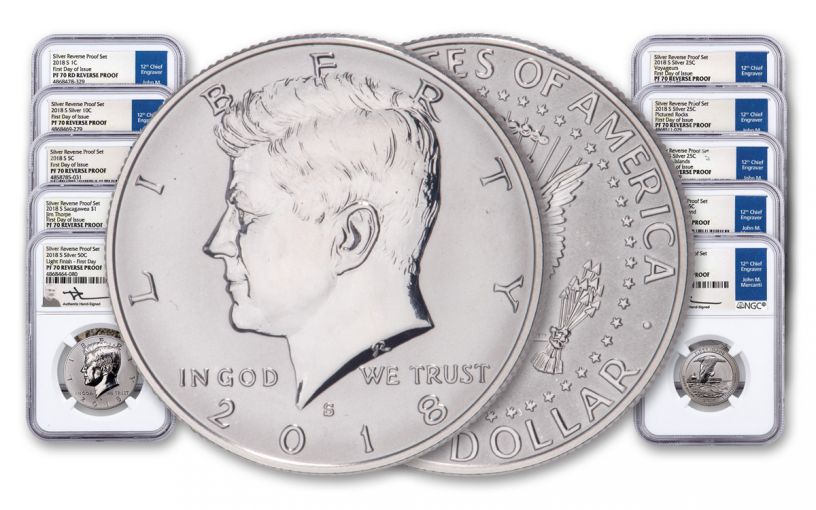 Availability: Out of Stock
This item is currently Out of Stock. Please sign up to be notified if this product becomes available.
Item #
341583
Add to Wish List Add to Wish List Wishlist is for registered customers. Please login or create an account to continue. Add to Compare

The U.S. Mint in San Francisco began producing proof coins in 1968 – and to mark its 50th year of minting America’s “best of the best,” the mint released a FIRST-EVER set of 10 stunning Reverse Proofs – including eight coins never before issued in this distinctive finish!

But while the entire set was supposed to be struck in Reverse Proof condition, with shimmering devices and frosty fields, something went wrong. Of the sold-out mintage of 200,000 sets, a small number escaped the mint with a “Light Finish” Kennedy Half Dollar – an error coin resulting from an obverse die not being prepared properly. You can get one of these error sets match-graded by the Numismatic Guaranty Corporation (NGC) as being in perfect Proof-70 (PF70) condition, certified as a First Day of Issue (FDI) coins, and sealed with the hand-signed signature of John Mercanti, 12th Chief Engraver of the U.S. Mint.

The very best in U.S. coinage, Proof finish coins are the ultimate in quality, beauty and value – double-struck under intense pressure to bring out their intricate details and dazzling luster. To achieve a Reverse Proof effect, the dies and planchets are specially prepared so that multiple strikes result in frosty fields and shimmering details – the complete opposite of their traditional proof finish counterparts – and far more scarce! A good way to tell the difference is to imagine the difference between a photograph and its negative. When held right, a standard proof appears like a black-and-white photograph while a reverse proof takes on the appearance of its negative. The visual effect is remarkable!

This first-ever 50th Anniversary Reverse proof Set is a must-have for any fan of the mint’s annual releases. Only 350 are left in our vault, so secure yours now!

If you are looking for a way to appreciate the stunning designs of America’s coinage, don’t miss your chance to own this 2018 San Francisco Mint Silver Reverse Proof Set with its eight first-ever coins and “Light Finish” Kennedy Half Dollar error coin. Order now at GovMint.com!