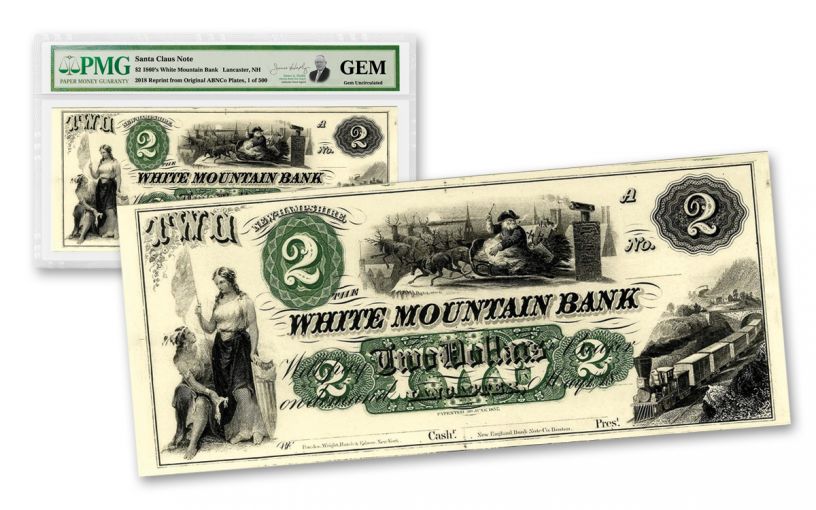 Availability: In Stock
This item will ship within 2 business days.
Item #
340996
CC Payments as low as
$247.50 / month
Add to Wish List Add to Wish List Wishlist is for registered customers. Please login or create an account to continue. Add to Compare

Santa Claus is Comin’ to Town – On America’s Most Famous Obsolete Note!

Prior to the Civil War, there was no national currency in the United States! Instead, individual banks issued their own paper currency. More than 11,000 different types of notes were issued before this system came crashing to an end following President Abraham Lincoln’s order for the government to begin printing official, federally issued notes. Not only did the decision bring order to a chaotic system of paper currency that plagued the war-torn nation, but along with the order came a heavy tax on the former individually-issued bank notes. This quickly led to their discontinuation and by the 1880s they were collectively labeled as “Obsolete” bank notes.

Of those 11,000 Obsolete Bank Notes, one stands head and shoulders above them all: the Santa Claus Note displaying the one and only jolly elf from the North Pole. So beloved is this design that it ranks as #23 on the Top 100 Bank Note listing. What’s more, one of these notes graded in Fine-15 condition (on a 1-70 scale) sold at a 2012 auction for more than $8,000!

You may never have the opportunity to own one of those classic notes, but thanks to a startling revelation, you can own the next best thing: A certified reprint made from the ORIGINAL plates! For collectors, this is like a Christmas miracle!

It came about thanks to the foresight of three investors from New Jersey. In 2005, when the American Bank Note Company decided to liquidate its remaining inventory of steel and copper plates used to print bank notes, stock certificates and promotional items, the trio spent millions to obtain the massive archive! There were nearly 1,000 obsolete bank note plates in the collection – some of them still wax-sealed from the day they were retired back in the 1800s! Now, after years of painstakingly combing through the hoard, they discovered THE plates used to print the famous “Santa Claus Note” issued by the White Mountain Bank of Lancaster, New Hampshire in the 1850s.

Since we used the actual plates – not copies – for these reprints, we had to be extremely careful to avoid the risk of damaging the delicate originals. The relatively soft steel used to make the plates all those years ago meant we had to handle them with kid gloves. We even went so far as to use an original Spider Press, which is the same type of press that would have been used to print the original notes back in the mid-1800s! The process is done extremely slowly by hand, and was so time consuming and intricate that we were able to print no more than 30 notes per day!

To preserve the plates’ integrity, our run was limited to just 500 notes, and now we’re making them available to GovMint customers exclusively through this offer. Each will come individually encased in a protective slab and numbered by Professional Money Guaranty (PMG), the paper money grading division for the Numismatic Guaranty Corporation (NGC), and will be graded as being in Gem Uncirculated condition. We could have stopped there but we didn’t. In an effort to maintain the originality of the notes, we sought out James A. Haxby, the world’s foremost export of Obsolete Notes, to gain his insight on these reprints. Once he heard what this was about, he was so excited that he immediately insisted on being part of the program. Mr. Haxby was so impressed with the end result that he personally signed each PMG label!

Original plates, vintage press, and the hand-signed approval of the world’s foremost expert on Obsolete Bank Notes—these 2018 Santa Claus Obsolete Notes aren’t going to last long. This may be your only chance to own this coveted design. Remember, just 500 of these spectacular Santa Claus Notes have been reprinted and they will disappear quicker than the cookies you leave out for Saint Nick!

It was an original plate from this same run of notes which brought the 2018 Santa Claus Obsolete Bank Note to life, resurrecting the most coveted Obsolete Bank Note design for modern collectors. It’s like finding the original dies for a 1933 Saint-Gaudens Double Eagle – one of the rarest and most sought-after U.S. coins in history – and then using those dies to restrike a series of coins. Just thinking about it makes us as giddy as kids on Christmas morning!