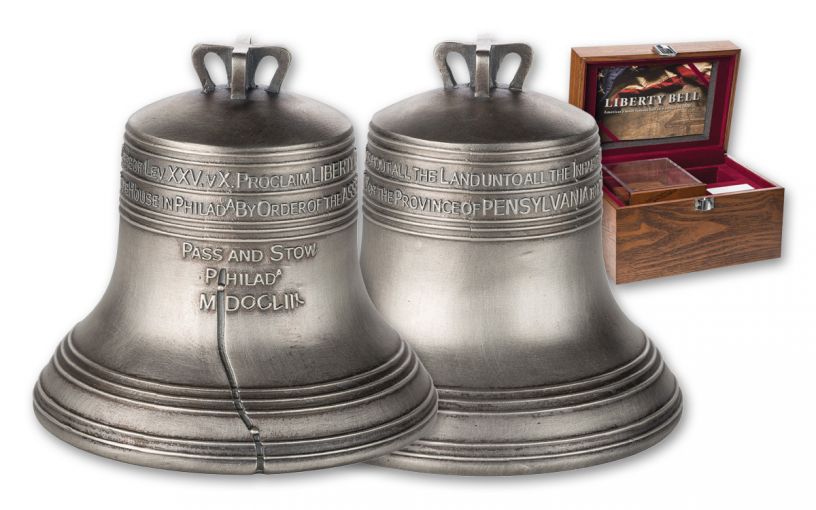 Availability: Out of Stock
This item is currently Out of Stock. Please sign up to be notified if this product becomes available.
Item #
341856
Add to Wish List Add to Wish List Wishlist is for registered customers. Please login or create an account to continue. Add to Compare

Let Freedom Ring In Your Collection

No one knows what originally caused the crack in the State House Bell, known today as the Liberty Bell. Its predecessor, installed in 1751 in the tower of the Pennsylvania State House, also known as Independence Hall, cracked on the first test ring. Not wanting to order a second bell from the Whitechapel Foundry in London, Pennsylvania Assembly Speaker Isaac Norris instead allowed local metalworkers John Pass and John Stow to melt down the bell and recast a new one right there in Philadelphia. It went on to be used for nearly 90 years, calling lawmakers to meetings and gathering townspeople for important news.

It was not until the 1830s that the old State House Bell began to take on a significance as a symbol of liberty – and soon after, in the early 1840s, a narrow split began to develop, and a repair was required. The larger split you can see on the bell today was actually the result of the repair job, used to stop the further spread of the crack! However, it didn’t work, and a second crack silenced the bell forever.

While no person living today has heard the sound of the bell’s toll, you can still take home your very own version of the bell, cracks and all! Struck in four ounces of 99.9% silver, just 1,776 of these beautiful antiqued Liberty Bell coins exist. They come shaped like the real thing, inscription and all, and even come in a mint wooden case that houses the coin in a second display case perfect for displaying your new acquisition just as the original appears in Philadelphia.

This isn’t just a replica of Philadelphia’s famous Liberty Bell, it’s actually a legal-tender coin! It will make a great display in any home or office! Don’t miss out – order yours today!