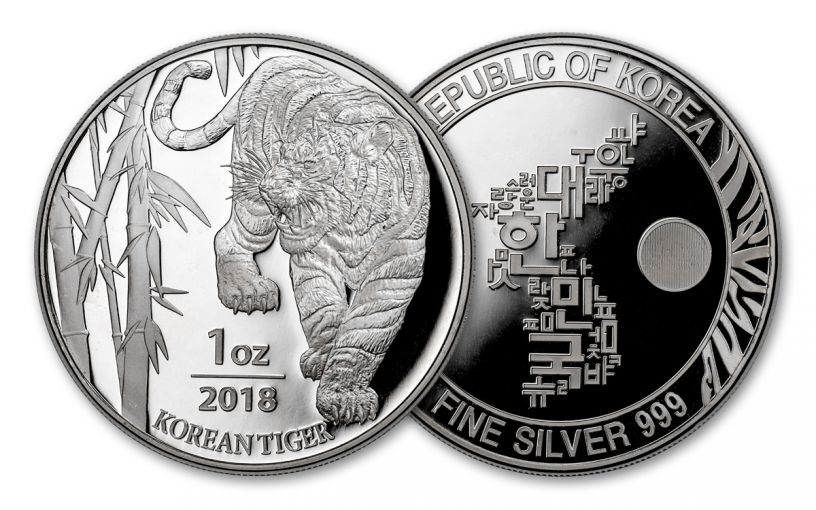 Availability: Out of Stock
This item is currently Out of Stock. Please sign up to be notified if this product becomes available.
Item #
332227
Add to Wish List Add to Wish List Wishlist is for registered customers. Please login or create an account to continue. Add to Compare
Product Description

Don’t Wait to Pounce on These Silver Tigers!

The tiger is deeply rooted in Korean culture so it’s no surprise that when South Korea decided to launch an inaugural series of one-ounce silver bullion medals they quickly settled on the endangered Korean Tiger.  The results are quite impressive to say the least. Each of these Silver Tigers is struck with one full Troy ounce of 99.9% silver with a riveting design that captures the essence of the endangered animal like nothing we’ve seen.

The Korean Tiger is integral to Korea’s creation myth. According to legend, a tiger and a bear asked the son of God to make them human. He agreed under one condition: they both had to live in a cave for 100 days subsisting on nothing but herbs and spices. The bear was up to the task and at the end of the 100 days was transformed into a beautiful woman, who became the mother of Tangun, father of Korea. The Tiger, however, was impatient and hungry and bolted from the cave before the 100 days were over. He has been slinking through the mountains ever since.

Tragically no tigers exist today in Korea. Depending on who you believe, the last tiger was captured on the Korean peninsula in either 1922 or 1944. The Japanese occupation of Korea during World War II was a bitter foreshadowing for the end of Korea’s unity and the nation’s tiger as the country was torn in two following the Korean War and the tiger faded quietly into folklore.

Fortunately for you, South Korea’s tiger prowls again on this beautiful silver medal. Each has been graded by the Numismatic Guaranty Corporation (NGC) to be in Gem Brilliant Uncirculated condition so it looks as fresh and crisp as the day it left the mint. Plus, each coin has an added security feature – a lenticular design struck into the silver itself. Visible on the coin’s reverse, the lenticular feature will display either “Ag” or “999” depending on the viewing angle.

Just 30,000 of these wonderful Silver Tiger Bullion Medals have been struck for worldwide release. Their proximity to Chinese collectors, appeal to wildlife enthusiasts and attractiveness to silver stackers make this edition limit a relatively small mintage. Add one or more to you cart now!