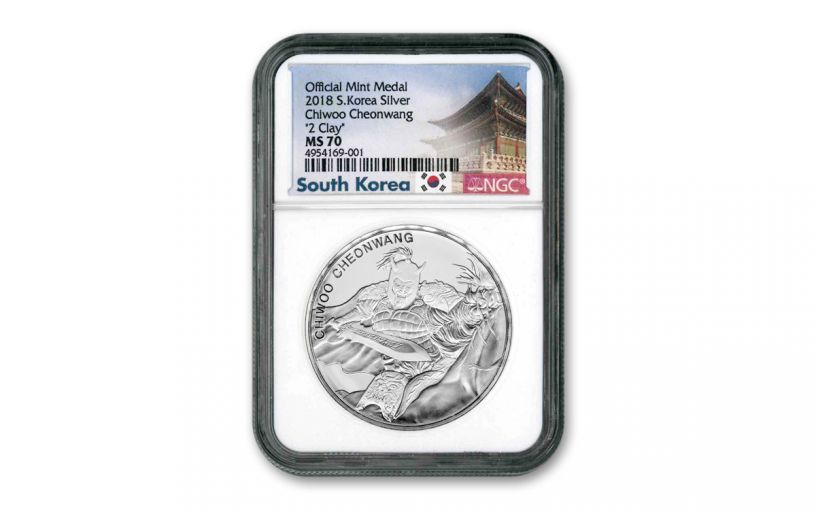 Availability: Out of Stock
This item is currently Out of Stock. Please sign up to be notified if this product becomes available.
Item #
345002
Add to Wish List Add to Wish List Wishlist is for registered customers. Please login or create an account to continue. Add to Compare

When South Korea released its inaugural Chiwoo Cheonwang series of silver bullion medals in 2016, it was met with worldwide acclaim. It was so popular that a year later its entire mintage completely sold out. In 2018, South Korea released its third entry in the series – and for the first time ever, has released a special two-ounce silver coin with an incuse design!

An incuse design means the details are sunk below the surface of the coin. Most coins feature designs that rise from the surface. It’s a unique design technique not often attempted, but when done successfully – like on this 2018 South Korea Chiwoo Cheonwang Two-Ounce Silver Incuse Medal – it creates a superb contrast that you won’t want to miss!

South Korea really upped its game on the design of this two-ounce, 99.9% fine silver piece. While previous years showed Chiwoo Cheonwang in beautiful detail, they can’t compare to the exciting image on this year’s medal. Chiwoo Cheonwang is shown in vivid detail on the back of his warhorse, his battle sword extended in his right hand driving forward as if he’s going to slash an enemy lurking behind you. His battle helmet also for the first time reveals a portion of his face, a visage frozen in the frenzy of battle as he charges forward to victory.

And the image will look spectacular, too, because this 2018 South Korea Chiwoo Cheonwang Two-Ounce Silver Medal has been graded by the Numismatic Guaranty Corporation (NGC) as being in flawless Mint State-70 (MS70) condition, a distinction that means your perfectly-graded coin will have ZERO imperfections – showing all features and fields exactly as the engraver and mint intended! In addition, it will also come sonically sealed in an acrylic holder with an exclusive South Korea label.

The legendary warrior upon which this design is based on is regarded as the symbol of victory in Korea. In Korean mythology, Chiwoo Cheonwang is honored and worshiped as the “God of War.” In battle, he wore a demonic mask that obscured his face and terrified his enemies. Combined with his ability to cast magic spells and control the weather, Chiwoo Cheonwang fought a series of epic battles against China’s Yellow Emperor more than 4,500 years ago. Today his mask serves as the mascot for South Korea’s national soccer team, the Red Devils.

To assure you’re victorious in obtaining one of these beauties, add the 2018 South Korea Chiwoo Cheonwang Two-Ounce Silver Incuse Medal to your cart today!