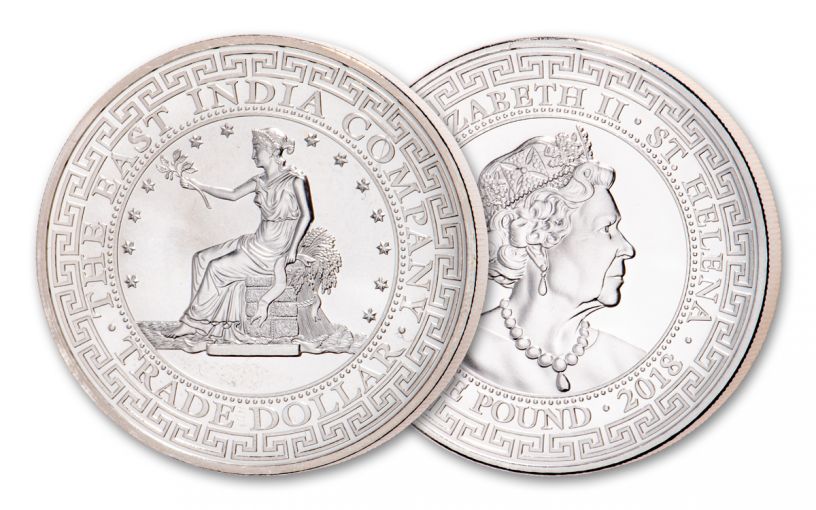 Availability: In Stock
This item will ship within 2 business days.
Item #
342246

During its heyday in the 1880s, the U.S. Morgan Silver Dollar saw widespread use in American commerce. But did you know it wasn’t the only U.S. silver dollar in circulation at the time? From 1873-1885, the U.S. Mint actually produced another silver dollar – only this one was slightly heavier than the Morgan Dollar and was used only for trade, where most of them ended up in China and the Far East. Now that classic design returns on a modern commemorative that’s sure to a must-have addition to any U.S. collection!

Struck on behalf of island nation of Saint Helena, this is the second release in the East India Company’s series honoring currency born of commerce and trade, this One-Ounce Silver U.S. Trade Dollar resurrects William Barber’s classic image of Seated Liberty, offering an olive branch while seated next to bales of wheat and other American traded goods. The obverse features Queen Elizabeth II. Both designs come surrounded by an oriental border similar to those seen on other trade coins. This attractive release comes in Brilliant Uncirculated (BU) condition as sharp and crisp as the day it left the mint. And, with a low limited edition of just 10,000 pieces worldwide, the time to act is now before they’re all traded away!

William Barber’s Seated Liberty design from the 1873-1885 U.S. Trade Dollar is considered by many to be one of his best creations. Now you can add that design to your collection with the 2018 Saint Helena £1 U.S. Trade Dollar One-Ounce Silver Coin.