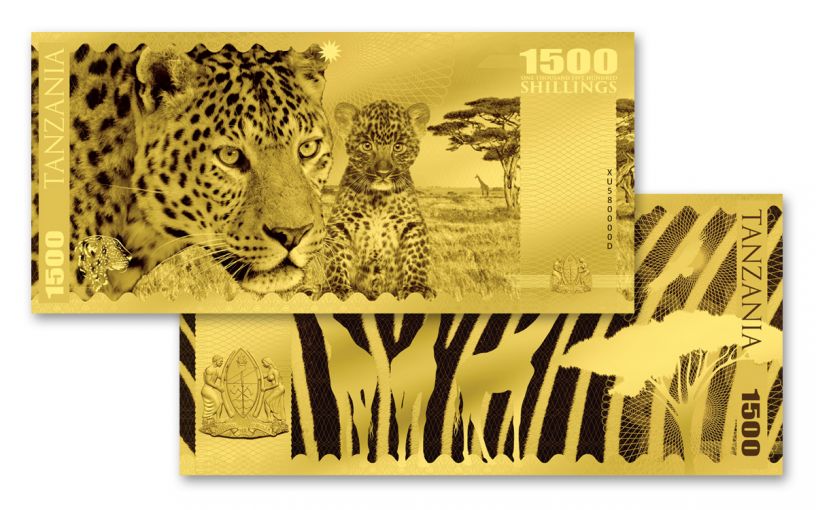 Availability: In Stock
This item will ship within 2 business days.
Item #
318182
Review this product
Add to Wish List Add to Wish List Wishlist is for registered customers. Please login or create an account to continue. Add to Compare
Product Description

Your Best Chance to Pet One of Africa's Big Cats

Solitary and territorial, the leopard is among the fiercest animals on the African continent. That is why they are included in the Big Five Game, which is often shortened to "Big Five," a list of the most dangerous animals to hunt on foot. Like the other animals on this list, which constitute the five notes in this series, the animal's appeal extends beyond just the interest of hunters to travelers, who hope to catch a glimpse of one or more while on safari. While getting close to the animals in the wild could be a deadly mistake, this note gives you the opportunity to see two of the cats up close. Making this particular note stand out among those in the series is the fact that the gold coloration closely mirrors the cats' natural color.

Leopards are unique in the animal kingdom in that they closely resemble animals frequently kept as pets, i.e. cats, with the main difference being simply a matter of size. Although they are every bit as beautiful as their domesticated cousins, they are far deadlier. That combination of beauty and power makes them among the most sought-after animals by those who go on safari, as well as those who visit zoos throughout the world. Their strength, ferocity, and territorial natures make it extremely dangerous to get close to them, but this note gives you the chance to see these beautiful creatures up close. Order your 2018 one gram Gold Tanzania Leopard note today, because they will not be around for long.