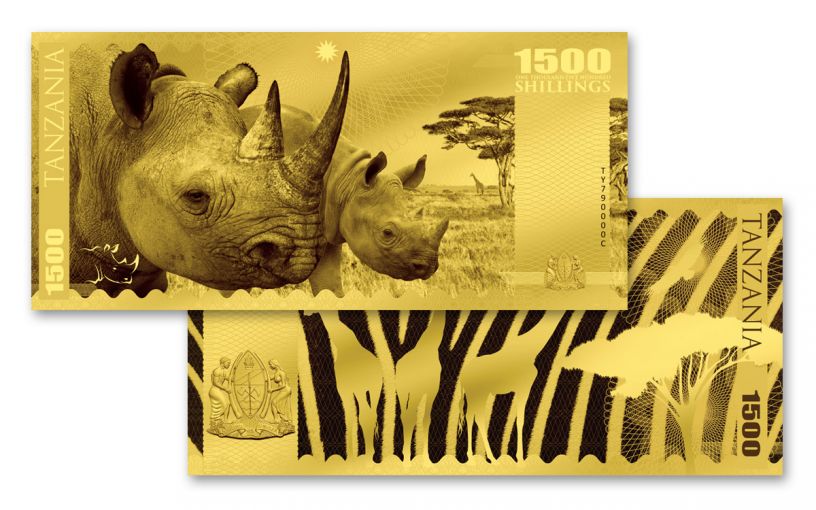 Availability: In Stock
This item will ship within 2 business days.
Item #
318180
Review this product
Add to Wish List Add to Wish List Wishlist is for registered customers. Please login or create an account to continue. Add to Compare
Product Description

For anyone who goes on safari in Africa, there are certain things that they want to make it a point to see. Near the top of that list is the rhinoceros, the massive land mammal known for the horns on its head. Some species of rhinos are listed as "critically endangered" by the IUCN Red List, but for now tourists and locals alike continue to admire their massive size. While they appear intimidating, rhinoceroses are generally docile animals, only charging when they fear that they are in danger. This gold note shows closeup views of two of them in their natural habitat on the African savanna.

An African safari is among those few vacations that are on just about every person's bucket list. The sense of adventure, danger, and exploration tickles the imagination of people across the globe. Five of those animals, originally known as the Big Five Game, are considered the most difficult to hunt on foot. Although the term was originally coined by hunters, tour operators have since begun using it as a marketing tool for those who want to see African wildlife. Now, Tanzania's Big Five series gives you the chance to add some of that allure to your collection. Order one of the notes in that series, the 2018 1g Gold Tanzania Rhino, at GovMint.com now, because these notes will be as elusive as the animals depicted on them.