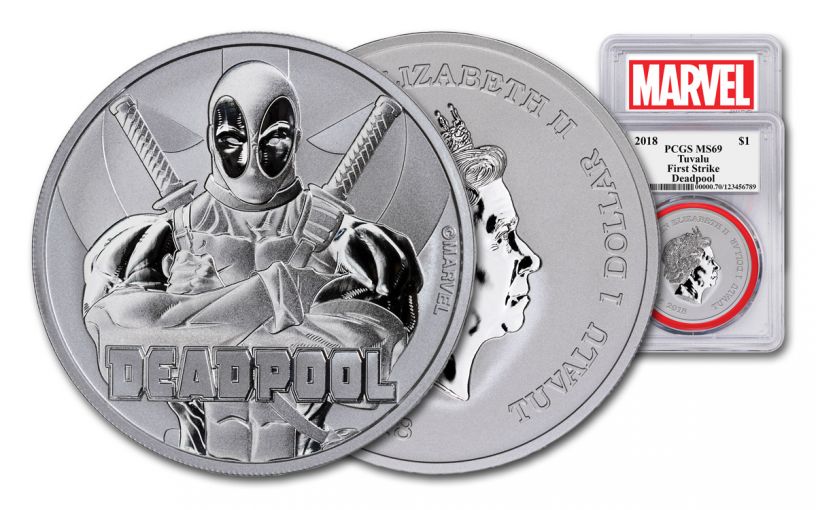 Availability: Out of Stock
This item is currently Out of Stock. Please sign up to be notified if this product becomes available.
Item #
341255
Add to Wish List Add to Wish List Wishlist is for registered customers. Please login or create an account to continue. Add to Compare

With Deadpool’s popularity at an all-time high, it's the perfect time to bring you the latest installment of the Perth Mint's Marvel bullion series, featuring the “Regeneratin’ Degenerate!” Each Brilliant Uncirculated (BU) coin in this popular new series is struck in an ounce of pure 99.9% silver. Issued on behalf of the South Pacific island nation of Tuvalu, an independent nation within the British Commonwealth, the coin is legal tender bearing a denomination of $1.

Your coin has been graded by the Professional Coin Grading Service (PCGS) as being in near-perfect Mint State-69 (MS69) condition, a distinction that means your almost-flawless coin will showcase an impressive full strike and indistinguishable imperfections – well above and beyond the quality of the vast majority of coins in the series. In addition, your coin will also be certified as a First Strike (FS) coin by PCGS, meaning that it was among the first struck by the mint and was verified within the first 30 days of issue. Your Deadpool One-Ounce Silver Coin will come sonically sealed in an acrylic case with a white display core and an exclusive Marvel label.

Perhaps the most relentlessly wisecracking hero in the universe, Deadpool possesses a healing factor that not only allows him to recover from the gravest injuries, but makes it possible for him to actually regenerate body parts. Chainsaw to the mid-section? No problem! A hero who regularly commits felonies, Deadpool is also a hilarious character in the Marvel Universe because he routinely breaks the “fourth wall” by talking directly to theater-goers or people reading his comics. When it comes to this hero the motto is “With great power comes no responsibility!”

Collectors couldn't get enough of the previous Marvel bullion coins from the Perth Mint, and we're expecting Deadpool’s loyal mob of fans to have these targeted for their collections. Whether you're continuing your collection or just starting out; a massive Marvel maniac or a silver stacker looking to bring some action-packed excitement to your bullion, this 2018 Deadpool Bullion Coin is one not to miss. Cover your ears and click some to your cart now!