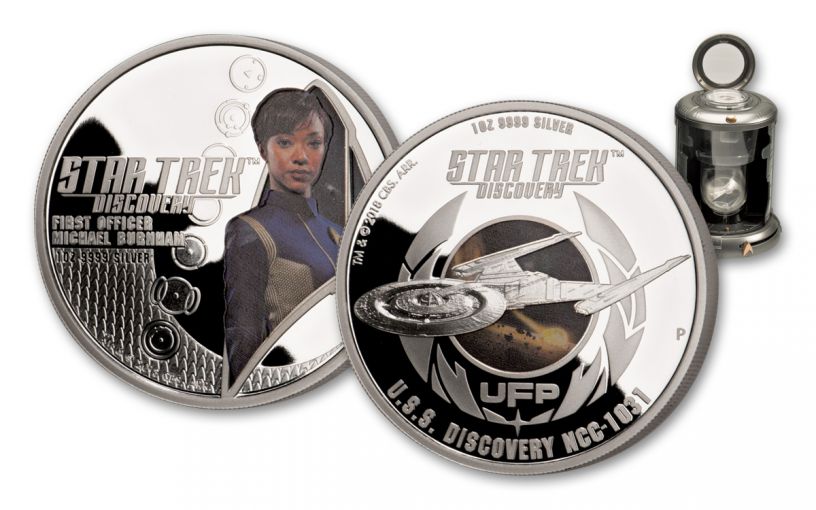 Availability: Out of Stock
This item is currently Out of Stock. Please sign up to be notified if this product becomes available.
Item #
320197
Add to Wish List Add to Wish List Wishlist is for registered customers. Please login or create an account to continue. Add to Compare

Star Trek has fascinated generations of fans since what is today known as The Original Series debuted in 1966. Many fans of the series, who are known as "Trekkers," collect all things Star Trek, from tee-shirts and masks to posters and coins. This two piece set gives those fans something new for the Discovery series, which began in 2017. One of the coins features First Officer Michael Burnham, the first ever African-American woman to play a leading role in a Star Trek series, while the other features the U.S.S. Discovery NCC-1031.

The world of science fiction tends to attract a fairly consistent audience, but the storylines in the Star Trek series brought it a much broader audience thanks to its presentation of contemporary issues in allegorical form. It overcame a difficult start to become one of the biggest franchises in the history of entertainment. With this two piece 2018 Tuvalu Silver Star Trek Discovery set, the Perth Mint offers both coin and Star Trek collectors the chance to own a pair of coins that feature a character and the starship from the latest edition. Order your set at GovMint.com today because the low mintages of the coins in this set mean that it will not be available for long!