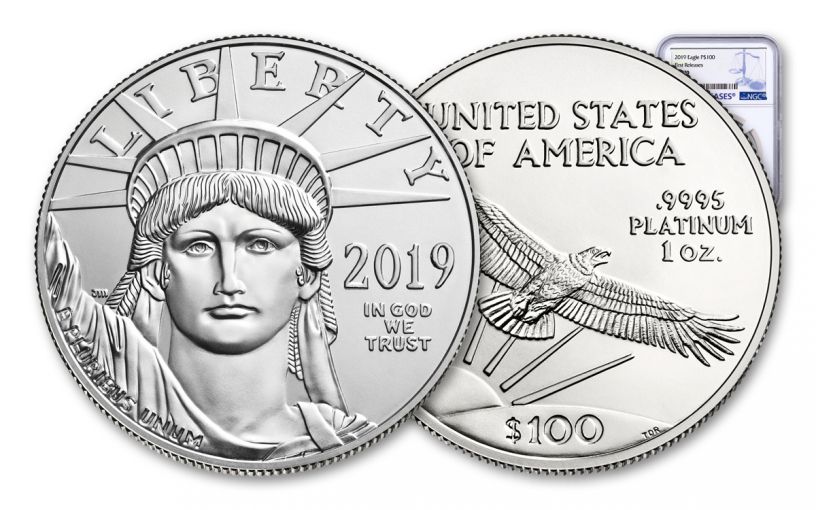 Availability: Out of Stock
This item is currently Out of Stock. Please sign up to be notified if this product becomes available.
Item #
344582
Add to Wish List Add to Wish List Wishlist is for registered customers. Please login or create an account to continue. Add to Compare

Your 2019 Platinum American Eagle has been graded by the Numismatic Guaranty Corporation (NGC) as being in flawless Mint State-70 (MS70) condition, a distinction that means your perfectly-graded coin will have ZERO imperfections – showing all features and fields exactly as the engraver and mint intended. This is a remarkable grade when you consider the Mint does not incorporate any special handling with its bullion coins, being more concerned with requirements for weight and size rather than quality.

In addition, NGC has graded your Platinum American Eagle to be a to be a First Releases (FR) coin, meaning that it was among the first struck by the mint and was verified within the first 30 days of issue. Collectors seek out these coins because they are produced with new dies and considered to have sharper strikes and deeper mirrors than those that are struck later. Also, the population of coins labeled First Releases is only a fraction of the total mintage.

It’s also important tot note that platinum is one of the world’s most precious and coveted metals. While gold has long been the standard for currencies around the world, platinum is actually 15 times rarer than gold. What’s more, 90% of the world’s platinum supply comes from just four mines – three in South Africa and one in Russia.

Now in its second decade, America’s Platinum Eagle is a great choice for collectors and bullion stackers alike. Order yours today!