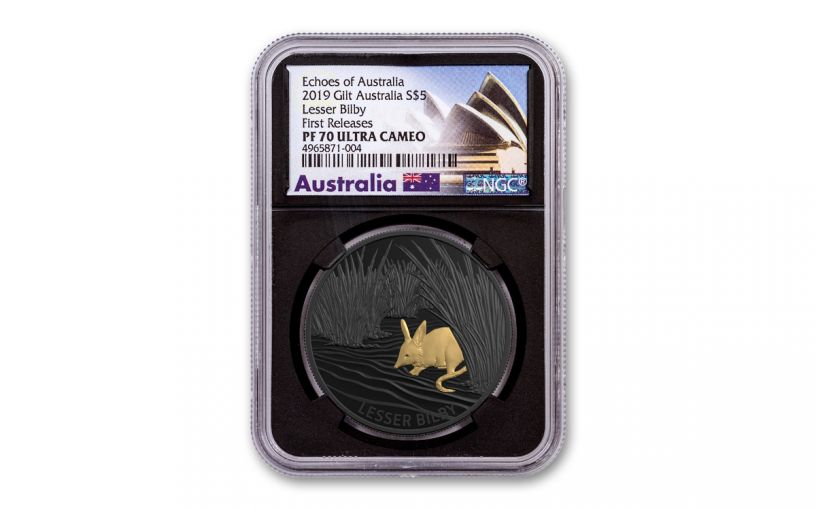 Availability: In Stock
This item will ship within 2 business days.
Item #
350061
Add to Wish List Add to Wish List Wishlist is for registered customers. Please login or create an account to continue. Add to Compare
Recommended Products
Product Description

The appearance of Australia’s Lesser Bilby might be best described by saying it looks like a kangaroo mouse. The critter is in fact a marsupial with a pouch to carry its young. Or more accurately it was a marsupial because it’s been listed as extinct since 1950. Thanks to a new coin from the Royal Australian Mint, the Lesser Bilby lives again as the second coin in the Echoes of Australia series!

Struck in a full ounce of highly-pure 99.9% fine silver, the coin features the creature deftly darting about its desert habitat in central Australia. Also known as a Yallara, the Lesser Bilby was a white-tailed, rabbit-eared animal that was first discovered in 1887 that grew to be no bigger than a juvenile rabbit. Before it could be fully studied, however, the Lesser Bilby died out thanks to a combination of predators, territorial competition with rabbits, and human trappers. The last living specimens were collected in 1932 and the last specimen ever studied was the skull of one found in a Wedge Tailed Eagle’s nest in 1967.

Though extinct, the Lesser Bilby has not been forgotten. This legal-tender $5 coin paints a haunting picture of this unique creature with a theme that includes the addition of black nickel plating over the entire coin and selective gold plating over the Lesser Bilby design. The entire presentation is even more fantastic due to its proof condition. Its hand-selected planchets, polished dies and multiple strikes have produced beautifully evocative frosted details rising over dreamy mirror-like fields.

In fact, your 2019 Australia Echoes of Australian Fauna Lesser Bilby One-Ounce Proof has been graded by the Numismatic Guaranty Corporation (NGC) as being in flawless Proof-70 (PF70) condition, a distinction that means your perfectly-graded proof will have ZERO imperfections – showing all features and fields exactly as the engraver and mint intended. In addition, NGC has graded your proof to be a First Releases (FR) coin, a designation that means your coin was received by NGC or an NGC-approved depository within the first 30 days of its release. It will come sonically sealed in an acrylic holder with an exclusive Sydney Opera House label.

Don’t wait long to add this exotic creature to your menagerie of coins because the Royal Australian Mint has set the maximum worldwide release at just 5,000. Don’t miss out – click one to your cart today!

The 2019 Lesser Bilby One-Ounce Silver Proof is sure to attract the attention of collectors around the world. Add one of these fantastic coins to your collection now before our supply becomes extinct!