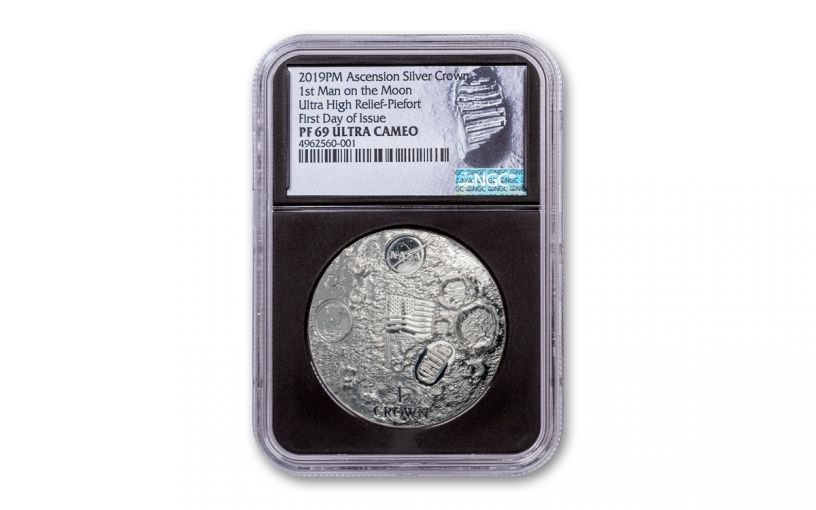 Availability: Out of Stock
This item is currently Out of Stock. Please sign up to be notified if this product becomes available.
Item #
349825
Add to Wish List Add to Wish List Wishlist is for registered customers. Please login or create an account to continue. Add to Compare
Product Description

Now, in honor of the 50th Anniversary of the Apollo 11 mission, Ascension Island is releasing a limited-edition commemorative silver proof that pays tribute to the First Man on the Moon and the island’s role in making it happen. Struck by the world-renowned British Pobjoy Mint in two ounces of highly-pure 99.9% fine silver, the legal-tender coin not only shows an image of the famous first footprint on the moon’s surface, but it does so in incredible Ultra High Relief detail against the backdrop of a domed coin that expertly replicates the lunar surface with its rough terrain and craters rising from the face of the coin.

In addition, Pobjoy received special permission from NASA to use the space agency’s famous “meatball” logo and Apollo 11 Crew Patch. The logos along with the 1 CROWN denomination are all featured on the reverse of the coin encircling an engraving of the American flag planted on the moon’s surface right smack in the center of the design.

Your 2019 Ascension Island First Man on the Moon Two-Ounce Silver Coin has been graded by the Numismatic Guaranty Corporation (NGC) as being in near-perfect Proof-69 Ultra Cameo (PF69UC) condition, a distinction that means your almost-flawless proof will showcase an impressive full strike and indistinguishable imperfections – well above and beyond the quality of the vast majority of coins in the series. In addition, NGC has certified that your proof is a First Day of Issue (FDI) coin, meaning it was received by NGC or an NGC-approved depository by the release date or on the business day within 24 hours of the official release date. It will also come sonically sealed in an acrylic holder with a black display core with an exclusive NGC label that features the famous first footprint on the moon.

Don’t delay; with only 650 of these impressive silver proofs available for worldwide release, the time is now to reserve your coin before they’re all gone!