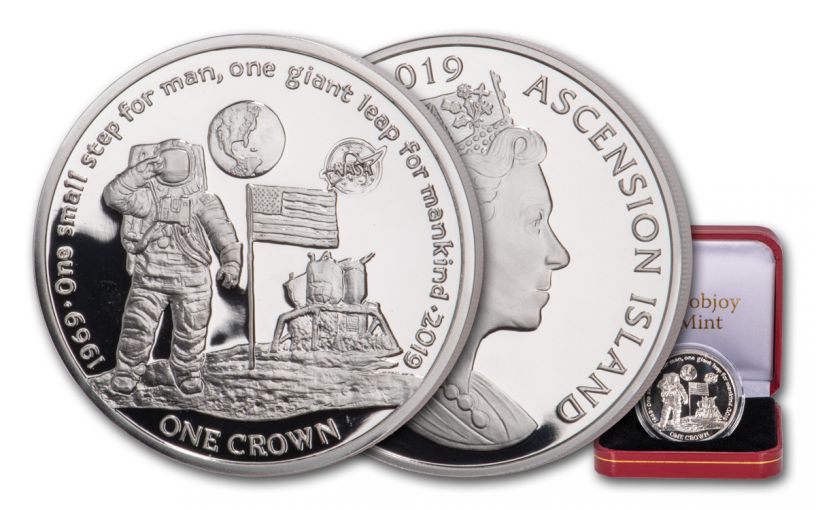 Availability: In Stock
This item will ship within 2 business days.
Item #
341667
Review this product
Add to Wish List Add to Wish List Wishlist is for registered customers. Please login or create an account to continue. Add to Compare
Product Description

Now, in honor of the 50th Anniversary of the Apollo 11 mission, Ascension Island is releasing a limited-edition commemorative silver proof that pays tribute to the First Man on the Moon and the island’s role in making it happen. Struck by the world-renowned British Pobjoy Mint in 28.28 grams of 92.5% sterling silver, the legal-tender coin not only shows an image of Astronaut Neil Armstrong saluting the American flag on the surface of the moon, it also features the words Armstrong spoke when he first stepped off the lunar module to become the first man to set foot on the moon: “One small step for man, one giant leap for mankind.”

In addition, Pobjoy received special permission from NASA to use the space agency’s famous logo. The logo along with the planet Earth, dual dates of 1969 & 2019, and ONE CROWN denomination are all featured on the reverse of the coin along with the Image of Armstrong saluting the flag in the foreground. This proof was expertly crafted by the mint from hand-selected planchets, polished dies and multiple strikes to produce beautifully frosted details rising over mirror-like fields that really make the design out of this world!

Don’t delay; with only 5,000 of these impressive silver proofs available for worldwide release, the time is now to reserve your coin before they’re all gone!