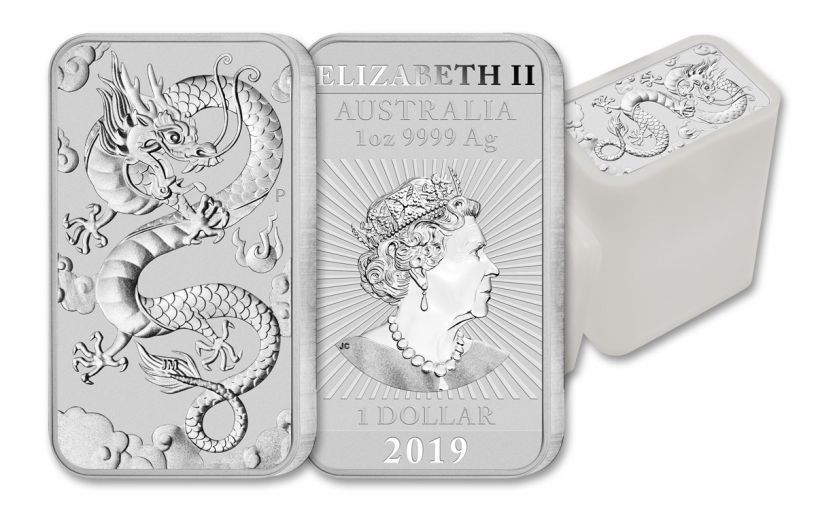 Availability: Out of Stock
This item is currently Out of Stock. Please sign up to be notified if this product becomes available.
Item #
347046

Holding a preeminent place in Chinese culture, the dragon looms large over such things as terrain, life, and energy. Some believe that he brings the waters of rain, the warmth of sunshine, water, and earth. Some even say that the mountains, valleys, rivers, buildings, and highways correlate to the creature’s head, claws, tail, veins. For centuries, even the Chinese emperors referred to themselves as “dragons.”

Now, the Perth Mint has introduced the second release in its first ever rectangular bullion coin series with the 2019 Australia One-Ounce Silver Dragon Bar. Struck in a full ounce of highly-pure 99.99% silver, the new coin features a traditional Eastern dragon on the reverse chasing the flaming Pearl of Wisdom. The Perth Mint’s famous “P” mintmark can be seen beside the dragon while floating in the background are puffs of clouds. The coin’s weight, fineness, denomination and 2019 year date are shown on the obverse along with an effigy of Queen Elizabeth II.

Chinese-themed coins are among the most popular targets of countless collectors around the world. From ancient symbols to lunar animals, the coins make for convenient and affordable collections and bring with them ancient lore and tradition. It is fitting, then, that the Perth Mint decided to make the Chinese dragon the theme of its first ever rectangular coin series. Now you can add a lot of silver dragons to your collection by ordering this 20-piece tube of 2019 One-Ounce Silver Dragon Bars from GovMint.com. It’s a wonderful way to acquire silver while sharing in the celebration of Chinese culture!

From coins and costumes to gifts and art, the dragon’s importance in Chinese culture is visible in countless forms. Now it’s visible on this 2019 Australia One-Ounce Silver Dragon Bar. Click a 20-piece tube to your cart today!