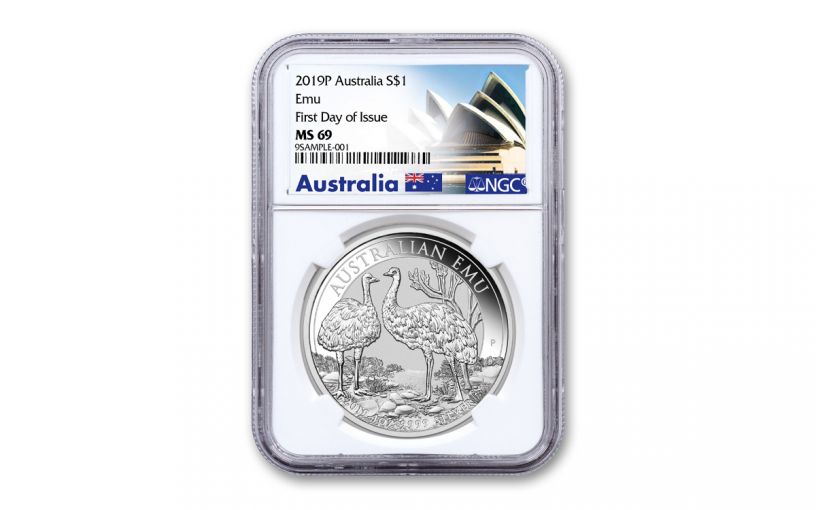 Availability: Out of Stock
This item is currently Out of Stock. Please sign up to be notified if this product becomes available.
Item #
351328
Add to Wish List Add to Wish List Wishlist is for registered customers. Please login or create an account to continue. Add to Compare
Product Description

This design for this year’s 2019 Australia One-Ounce Silver Australian Emu coin features a pair of emus in an Outback landscape complete with trees, rocks, bushes and a pool of water. Emus are the second tallest birds in the world and the only ones with calf muscles, allowing them to outdistance predators with strides as long as 9 feet when running at a top speed of more than 30 miles per hour. The two birds on this 99.99% pure silver coin are taking a break from running, however, so you can admire all the incredible detail in their bushy, primitive feathers.

In fact, these 2019 One-Ounce Silver Australian Emu coins are so well-struck that they have been graded by the Numismatic Guaranty Corporation (NGC) as being in near-perfect Mint State-69 (MS69) condition, a distinction that means these almost-flawless coins showcase impressive full strikes and indistinguishable imperfections – well above and beyond the quality of the vast majority of coins in the series. In addition, NGC has certified these Silver Australian Emus to be First Day of Issue (FDI) coins, meaning they were received by NGC or an NGC-approved depository by the release date or on the business day within 24 hours of the official release date. It will also come sonically sealed in an acrylic holder with an exclusive Sydney Opera House label.

Don’t be among those collectors who miss out on this immensely popular bullion issue. Order your 2019 One-Ounce Silver Australian Emu coin from GovMint.com today!