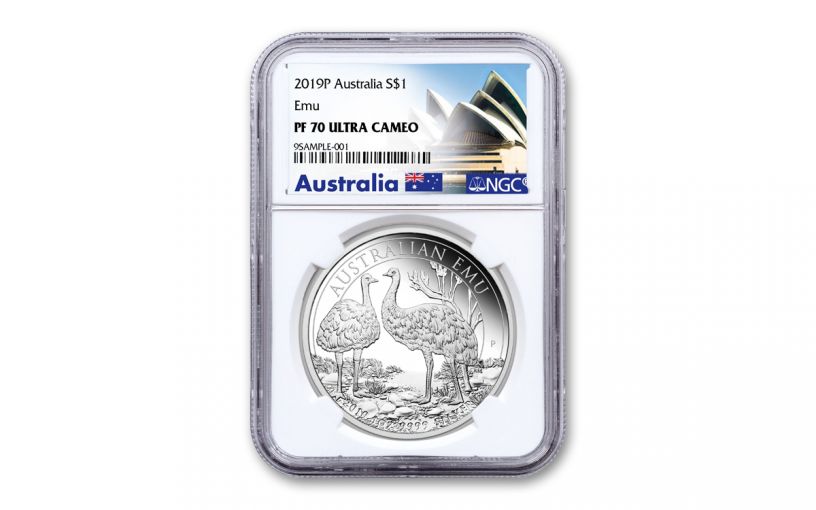 Availability: In Stock
This item will ship within 2 business days.
Item #
351327
Review this product
Add to Wish List Add to Wish List Wishlist is for registered customers. Please login or create an account to continue. Add to Compare
Complete your collection with one of these:
Product Description

When Australia’s world-renowned Perth Mint added the Emu to its annual stable of silver proof issues that was already home to the Kookaburra and Koala series it was met with almost instant success. Collectors were so enthused by the release that the entire mintage quickly sold out. Perhaps it should have been expected – while the Koala and Kangaroo series are extremely popular among collectors, they were released with much higher edition limits. The one-ounce silver proof version for both of those series in 2018 was set at 9,000. By contrast, the 2018 Silver Australian Emu One-Ounce Silver Proof had a mintage of just 3,000 – only a third of the other coin series!

Now the second-year 2019 Silver Emu Proof coins have arrived, and the mintage is unchanged: It’s once again set at 3,000, meaning collectors who want one may soon find themselves struggling to get one!

This design for this year’s 2019 Australia One-Ounce Silver Australian Emu Proof features a pair of emus in an Outback landscape complete with trees, rocks, bushes and a pool of water. Emus are the second tallest birds in the world and the only ones with calf muscles, allowing them to outdistance predators with strides as long as 9 feet when running at a top speed of more than 30 miles per hour.

The two birds on this 99.99% pure silver coin are taking a break from running, however, so you can admire all the incredible detail in their bushy, primitive feathers on this high-grade coin. In fact, the 2019 One-Ounce Silver Australian Emu Proofs available in this offer have been graded by the Numismatic Guaranty Corporation (NGC) as being in flawless Proof-70 Ultra Cameo (PF70UC) condition, a distinction that means each perfectly-graded proof will have ZERO imperfections – showing all features and fields exactly as the engraver and mint intended. It will also come sonically sealed in an acrylic holder with an exclusive Sydney Opera House label.

Don’t be among those collectors who miss out on this immensely popular silver proof issue. Order your 2019 One-Ounce Silver Australian Emu Proof from GovMint.com today!