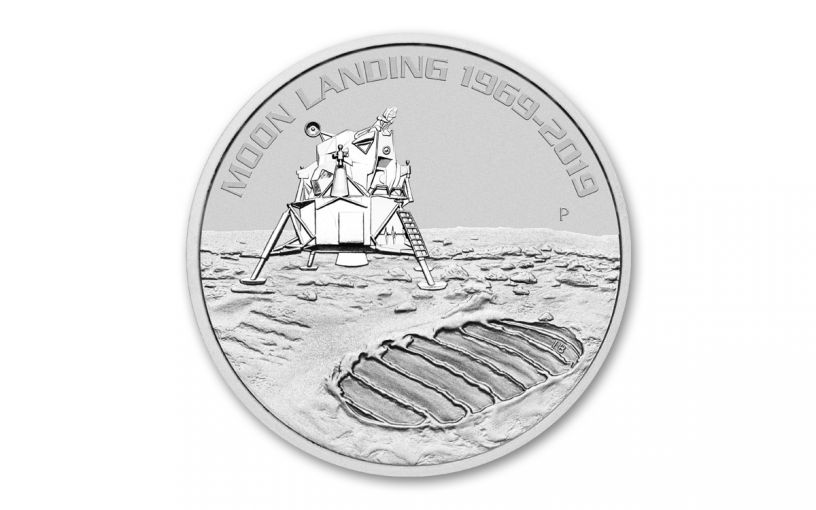 Availability: Out of Stock
This item is currently Out of Stock. Please sign up to be notified if this product becomes available.
Item #
348434

Take A Trip to the Moon Through the Lens of Australia!

When American astronaut Neil Armstrong scrambled down the ladder outside the lunar module Eagle to become the first person to set foot on the moon, he was being watched by 600 million people back on Earth. While many people clearly remember where they were and what they were doing that day on July 20, 1969 when those first ghostly black-and-white images appeared on their television screens, few remember that the signal beamed from the moon’s surface 238,900 miles away actually went through tracking stations in Australia!

To pay tribute to the monumental milestone in human achievement as well as broadcasting it back home to Earth, Australia’s world-renowned Perth Mint has issued a series of one-year-only commemorative bullion coins. Brimming with excitement, these fantastic coins pay tribute to the 50th anniversary of NASA’s successful Apollo 11 mission that landed the first men on the moon. The design shows the lunar module resting on the moon’s surface with the iconic image of Neil Armstrong’s footprint seen in the foreground in amazingly sharp detail. Above the design are the word’s MOON LANDING 1969-2019 in a futuristic typestyle.

Each $1 legal-tender coin in this offer is struck in one full ounce of highly-pure 99.99% silver and comes in gleaming Uncirculated condition as fresh and crisp as the day it left the mint. Just 50,000 of these incredible coins will be struck for worldwide release – a number that is far too small for the millions of coin collectors, silver stackers and fans of space & science that would like to own one of these pieces.

Don’t wait; let these coins make a giant leap into your collection! Reserve yours right now!