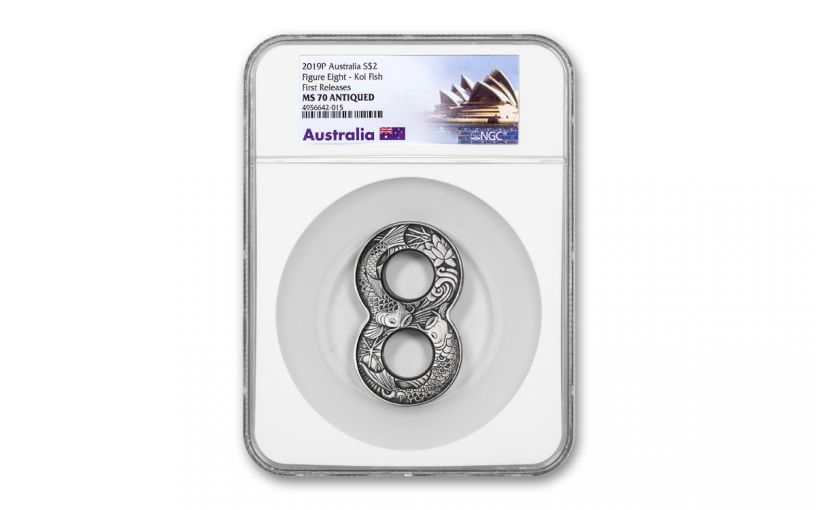 Availability: Out of Stock
This item is currently Out of Stock. Please sign up to be notified if this product becomes available.
Item #
347099
Add to Wish List Add to Wish List Wishlist is for registered customers. Please login or create an account to continue. Add to Compare

Have you ever entered a Chinese restaurant and upon seeing an aquarium stocked with large colorful Koi fish thought to yourself, “What’s the deal with that?!” The answer to your question dates back more than a thousand years to when cold-water carp were first selectively bred in China for their color. Since then, Koi have come to symbolize wealth, good fortune and prosperity – all things any self-respecting restaurant should aspire to achieve. And now the Koi fish serves as the theme of the latest release in Australia’s Figure Eight series of silver antiqued coins.

Struck by Australia’s prestigious Perth Mint in two ounces of 99.99% pure silver, the 2019 Figure Eight Koi Fish Silver Coin is only the second release of its kind, joining 2018’s extremely popular Figure Eight Dragon Silver Coin. Shaped like a figure eight complete with two open holes, the coin’s reverse features a pair of Koi fish swimming against the currents along with a lotus flower – symbols rife with vivid imagery that pay tribute to China’s rich cultural heritage. To augment the design, the coin has been given a unique antique finish – a subtle layer of surface abrasions that gives it the look and feel of an ancient artifact.

Among its earliest incarnations, the Koi is said to have spawned the most auspicious creature in Chinese mythology. According to legend, a single Koi fish swam upstream on the Yellow River, overcoming waterfalls and other obstacles to reach the top of a mountain where a “Dragon Gate” awaited. Once the fish reached the top, it became a dragon, the most powerful being in Chinese culture. The Koi is also connected to the yin and yang symbol where the black and white teardrops are said to be representations of two koi, one male and one female, a good luck symbol that has become synonymous for a happy marriage or relationship. What’s more, Koi have long been a feature of Chinese New Year symbolism because the word "fish" is pronounced the same as "abundance.”

Aside from its mystical attributes, the Koi is a very hearty fish that has a lifespan of between 100-200 years. The oldest Koi on record lived to be 225 years old! They also grow at a rate of 2 centimeters per month and can reach more than three feet in length. So, getting back to the Chinese restaurant question, the addition of a Koi aquarium not only represents wealth and prosperity, but also suggests that the restaurant has been around for many years and therefore must enjoy steady business due to its excellent service and delicious food – but that’s up to you to judge!

While you’re debating the merits of your favorite Chinese restaurant, why not add this innovative silver coin to your collection. The coin is meant to be lucky because both the number eight and the Koi symbolize good fortune. For any collector looking for a little luck, this 2019 Australia Figure Eight Koi Fish Two-Ounce Silver Antiqued Coin is a great choice. But don’t press your luck, just 3,888 of these coins have been struck in 2019 – less than half the mintage of the 2018 Figure Eight Dragon Silver Coin! And in this offer, you can secure it in flawless Mint State-70 (MS70) First Releases (FR) condition encapsulated with an exclusive Sydney Opera House label!

This unique coin is sure to draw the attention of avid collectors and casual observers alike with its combination of artistry and numismatic execution. While the innovation of the Perth Mint seems unlimited, your opportunity to own this unique 2019 Australia Figure Eight Koi Fish Two-Ounce Silver Antiqued Coin is not, so order yours now at GovMint.com!