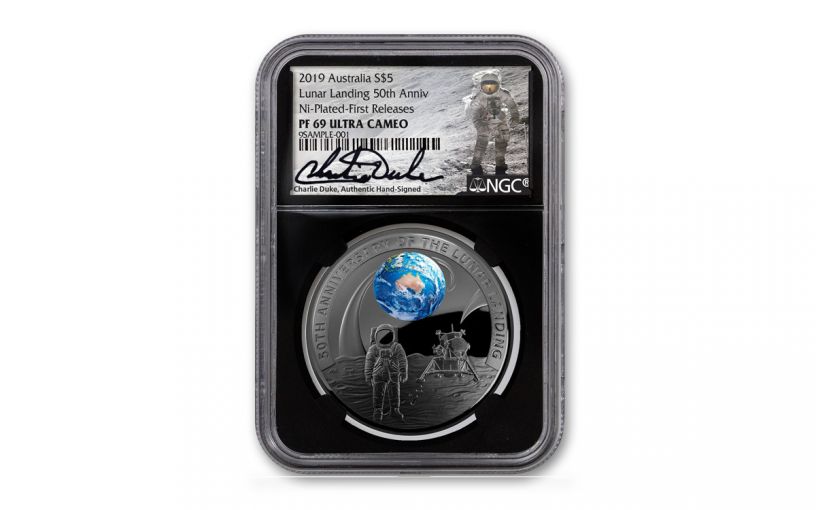 Availability: Out of Stock
This item is currently Out of Stock. Please sign up to be notified if this product becomes available.
Item #
351467
Add to Wish List Add to Wish List Wishlist is for registered customers. Please login or create an account to continue. Add to Compare
Related Articles
Product Description

It’s been 50 years since Apollo 11 landed on the moon, a historic moment in time that is today being celebrated across the world as a monumental triumph of science and human endeavor. For Australia, the celebration holds a special place due to the country’s involvement in sharing the moment as it happened with the rest of the world. That’s because while many people can clearly remember those first ghostly black-and-white images that appeared on their television screens on July 20, 1969, few remember that the signal beamed from the moon’s surface 238,900 miles away actually went through tracking stations in Australia!

To pay tribute to the historic moon landing and its own involvement, Australia is releasing a special series of one-year-only commemorative coins. Struck by the prestigious Royal Australian Mint, the design shows an astronaut on the moon’s surface walking away from the lunar lander in the background. In the sky, our own plant earth is depicted in full color floating in the sky with the continent of Australia facing the moon. The obverse shows Australia’s CSIRO Parkes radio telescope pointed at the moon as it receives signals from the Apollo 11 landing – a theme captured by transcripts from the Apollo 11 crew engraved in the background.

The coin also features the addition of a special black nickel plating that adds and eerie darkness to the design that emphasizes the bleak lunar landscape and the vastness of space. In addition, this coin has a seldom-seen domed curve to mimic the moon’s surface. It’s one of the few domed coins in the world, making it a unique collectible in its own right! In fact, it’s the world’s FIRST dome-shaped colorized nickel-plated coin ever struck!

Each $5 legal-tender coin in this offer is struck in one full ounce of highly pure 99.9% silver and comes graded by the Numismatic Guaranty Corporation (NGC) as being in near-perfect Proof-69 (PF69) condition, a distinction that means your almost-flawless coin will showcase an impressive full strike and indistinguishable imperfections – well above and beyond the quality of the vast majority of coins in the series. In addition, NGC has certified that these proofs are First Releases (FR) coins, a designation that means that they were received by NGC or an NGC-approved depository within the first 30 days of their release.

As a special added feature, these coins will come sonically sealed in acrylic holders with black display cores that feature exclusive labels personally signed by astronaut Charles “Charlie” Duke. As CAPCOM (Capsule Communicator) for the landmark Apollo 11 mission, he was literally the voice of Mission Control for millions of people watching on television and listening on the radio as the historic mission unfolded. Duke made history himself a few years later, becoming the youngest man to walk on the moon as part of Apollo 16 in 1972.

Just 10,000 of these incredible coins will be struck with only 4,000 being available outside Australia for worldwide release – a number that is far too small for the millions of coin collectors, Silver bugs and fans of space & science that would like to own one of these pieces. In addition, each coin will come in its original government packaging from the mint and accompanied by a numbered Certificate of Authenticity.