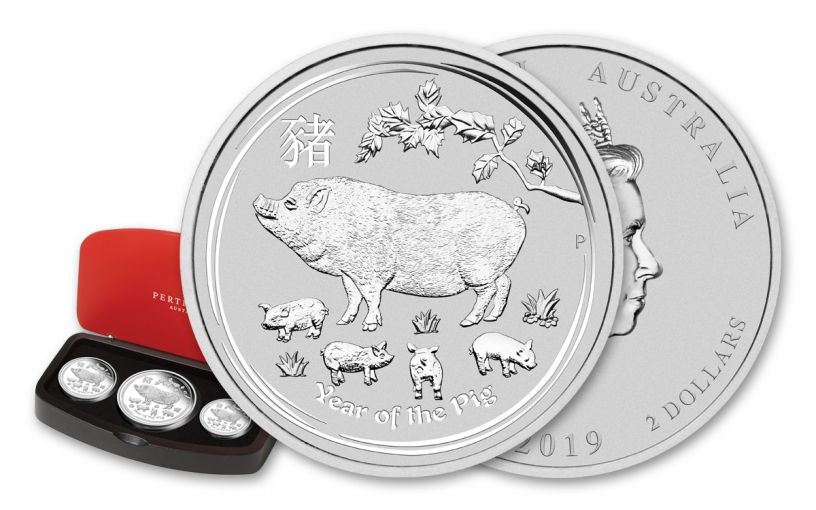 Availability: In Stock
This item will ship within 2 business days.
Item #
340023
CC Payments as low as
$115.00 / month
Add to Wish List Add to Wish List Wishlist is for registered customers. Please login or create an account to continue. Add to Compare
Recommended Products
Product Description

Collectors are Going Hog Wild for Australia’s Year of the Pig Silver Proofs!

Considered to be the fifth most intelligent animal in the world – even smarter than dogs – pigs are actually capable of playing video games with more focus and success than chimpanzees! Sure, this may sound like we’re describing your average basement-dwelling teenager, but there’s no doubt that the Silver Lunar Year of the Pig Proofs from Australia we’re making available here prove that the pig is among the world’s most popular animals.

This three-piece collection of highly-pure 99.99% silver proofs from Australia’s world-renowned Perth Mint will have you squealing with delight. The set’s coins feature a one-year-only design that pays tribute to 2019 being the Chinese Lunar Calendar’s Year of the Pig. The design shows a contented mama pig surrounded by four adorable little piglets scampering about her legs. The design is completed with engravings of “Year of the Pig,” the Chinese character for pig, and the Perth Mint’s “P” mint mark. It’s a fitting design for both the lunar year and because of the increasing worldwide popularity of domesticated pigs.

The three exquisite proof coins in your set are a half-ounce 50-cent piece, a one-ounce dollar coin and a two-ounce two dollar coin. Each is legal tender in Australia, and the entire three-piece collection comes beautifully displayed in an official red-and-black presentation case packaged inside an illustrated outer shipper from the Perth Mint.

This is the perfect time to start or complete you collection of Lunar-themed coins from Australia’s Perth Mint. The coins also make a perfect gift for anyone born during the Year of the Pig. But with only 1,000 sets for worldwide release, there are far too few to go around. Act now to secure your proofs!

With a limited mintage of just 1,000 sets, there are far too few of these wonderful coins to go around for both coin collectors and pig fanciers. Don’t sit and let other collectors hog all of these sets later, get yours now!