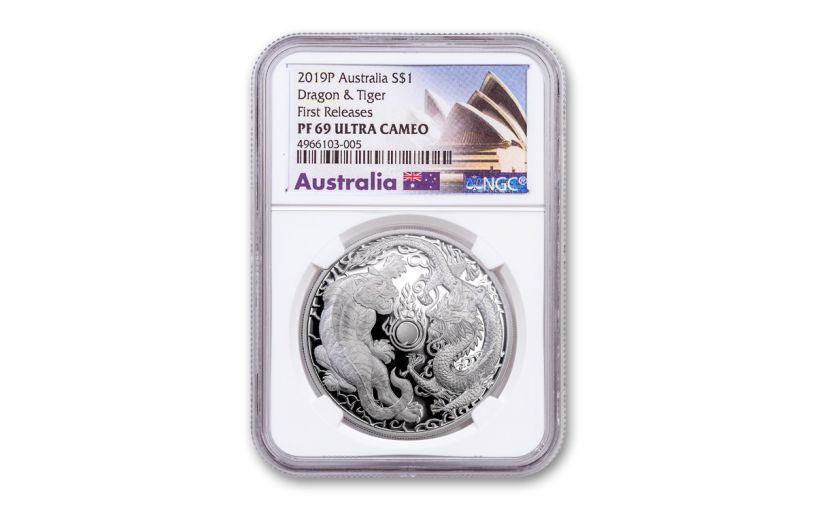 Availability: In Stock
This item will ship within 2 business days.
Item #
350335
Review this product
Add to Wish List Add to Wish List Wishlist is for registered customers. Please login or create an account to continue. Add to Compare
Product Description

Collectibles depicting the real and mythical creatures of the Chinese lunar calendar have captivated people for centuries. No group has fallen more under the hypnotic spell of these symbolic creatures than coin collectors, who each year eagerly acquire coins and medals bearing the likenesses of these entities. In 2019, Australia’s world-renowned Perth Mint issued a coin that contains the two most important and revered icons of the Chinese mythology – the Tiger and Dragon!

Struck in a full ounce of 99.99% silver, the legal tender proof coin pays tribute to the Tiger and Dragon on a gleaming one-dollar coin bursting with symbolism. The 2019 Australia Tiger and Dragon One-Ounce Silver Proof not only portrays the tiger and dragon matched in a never-ending contest of wills, but it shows the reason for the conflict: the flaming pearl of knowledge! The detail is so remarkable that it almost seems like you’re holding a vintage Chinese bas relief carving that depicts the tiger and dragon continuously circling the flaming pearl of knowledge in a perpetual dance of symmetry.

In Chinese culture, the dragon is revered as a divine mythical creature embodying power, wealth and good fortune. Dragons are frequently depicted in pursuit of the flaming pearl, a metaphor for wisdom and enlightenment. Like the dragon, the tiger has been held in awe for centuries. In fact, since the pattern on a tiger’s forehead is similar to the Chinese character for “king” it’s resulted in the big cat’s long-standing status as a symbol of bravery and power. The tiger and the dragon are regarded as ideal matches for one another: The tiger represents the embodiment of female or “yin” energy, and the dragon represents the male or “yang” energy.

The follow-up to the Perth Mint’s wildly successful 2018 Tiger and Dragon bullion release that had a sold-out mintage of 50,000, the 2019 Australia Tiger and Dragon One-Ounce Silver Proof is from a maximum worldwide mintage of just 2,500! In addition, your coin has been graded by the Numismatic Guaranty Corporation (NGC) to be in near-perfect Proof-69 (PF69UC) condition. In addition, NGC has also certified your Tiger and Dragon Silver Proof as being a First Releases (FR) coin! Each coin will come sonically sealed in a protective capsule with an exclusive Sydney Opera House label.

Don’t miss your chance to capture the balance and beauty of the 2019 Australia Tiger and Dragon One-Ounce Silver Proof. It’s available only while supplies last so add one to your cart today!