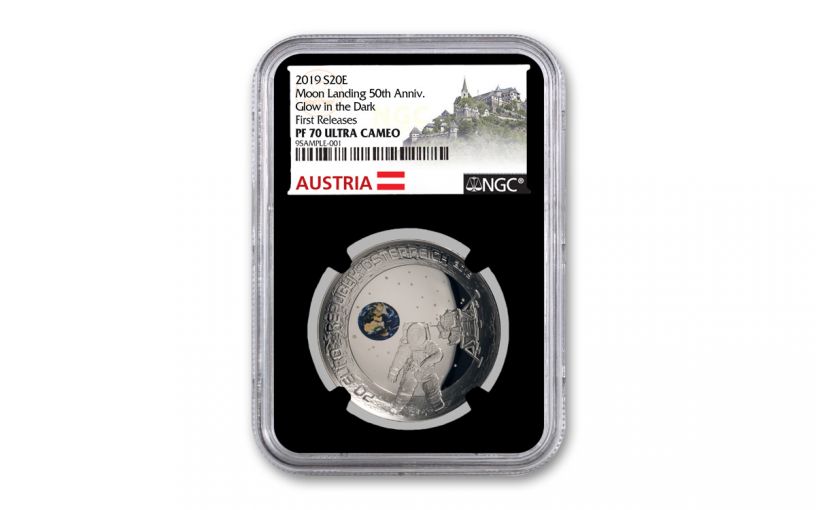 Availability: Out of Stock
This item is currently Out of Stock. Please sign up to be notified if this product becomes available.
Item #
348988
Add to Wish List Add to Wish List Wishlist is for registered customers. Please login or create an account to continue. Add to Compare

One Small Step for Coins, One Giant Leap for Numismatics

July 1969 signaled a massive change for humanity. For the first time in all of history, a man walked among the stars and set new heights for everyone. The event was so tremendous that people the whole world over celebrate this accomplishment to this day. One nation that is commemorating this momentous moment is Austria with this sensational 50th anniversary proof that pays tribute to the Apollo 11 moon landing – and did they ever put their all into it!

Struck in 15.56 grams of 92.5% Sterling silver, this legal-tender €20 coin features the ingenuous use of a unique domed shape to mimic the spherical nature of the moon. The design shows the lunar landing module Eagle floating just above an astronaut while a fully colorized Earth shimmers in the background. Dotting the sky are many glittering stars that actually glow in the dark! The coin’s reverse completes your journey to the moon by showing a crater-pocked lunar surface with the inscriptions ERSTE MONLANDUNG, 21 JULI 1969 and APOLLO 11. Just above the Apollo 11 inscription is a crosshair that pinpoints where the Eagle landed and Armstrong took his first historic step.

Your 2019 Austria Silver 50th Anniversary Moon Landing Proof has been graded by the Numismatic Guaranty Corporation (NGC) as being in flawless Proof-70 Ultra Cameo (PF70UC) condition, a distinction that means your perfectly-graded proof will have ZERO imperfections – showing all features and fields exactly as the engraver and mint intended. In addition, NGC has graded your proof to be a First Releases (FR) coin, a designation that means your proof was received by NGC or an NGC-approved depository within the first 30 days of the its release. It will come sonically sealed in an acrylic holder with a special black display core and an exclusive Austria label.

Your trip to the moon and stars is waiting for you. Book passage now by clicking one of these commemorative proofs to your cart. But you’d better hurry, the low limited edition of 30,000 has already been announced as being completely sold out at the Austrian Mint! Don’t remain earthbound, order yours now!

The 2019 Austria 50th Anniversary Moon Landing pulls out all the stops with its domed reverse, glow-in-the-dark stars, colorized Earth, and proof finish. This proof is completely sold out at the mint but GovMint still has some left. Don’t lose your chance to be amongst the stars; click one to your cart today!