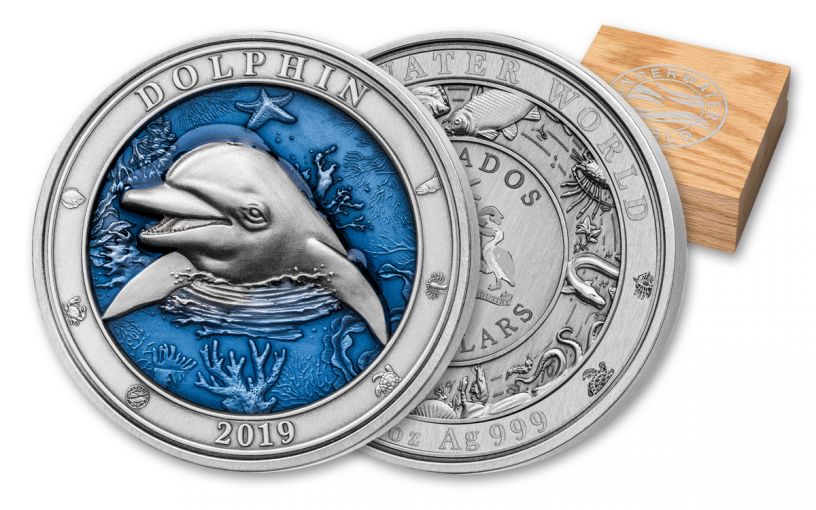 Availability: In Stock
This item will ship within 2 business days.
Item #
339398
CC Payments as low as
$147.50 / month
Add to Wish List Add to Wish List Wishlist is for registered customers. Please login or create an account to continue. Add to Compare

This Ultra High Relief Silver Dolphin Coin is Sure to Make a Splash in Your Collection!

The perceptions most people have of dolphins come from such sources as the television shows as “Flipper” and exciting aquatic performances staged daily at local zoos and aquariums. But these social animals are much more than the “happy-go-lucky” personas on display in these carefully choreographed events. In fact, male dolphins can be highly aggressive and often have skin covered with scars from fights – that’s why female dolphins are always used as the “stars” in television and movies.

Now the dolphin has a new starring role on a brand new coin from the island nation of Barbados. The third coin in its popular Underwater World coin series, the dolphin really makes a splash on this coin. And what a coin! Struck in three full ounces of 99.9% silver, the massive 50 mm coin depicts a dolphin poking its head and front flippers out of the water in incredible ultra high relief. Enhanced by an antique finish along with selective translucent marine-blue enamel layered over the water portion of the design, the awesome 3D effect makes it look like the dolphin is half in and half out of the water on the very surface of your coin!

It’s common knowledge that dolphins are highly intelligent and communicate with each other by clicking, whistling and making other sounds. They normally live in “pods” of up to 12 individuals and subsist on a diet of fish. A pod will often work together to heard a school of fish onto a mud flat where the dolphins will then feast, consuming as much as 22 pounds of meat each day. Male dolphins fight for status within the pod and will display aggression towards sharks or other creatures that may threaten their food supply. Dolphins seem to enjoy human contact and often splash and vocalize around people. They have also been known to assist other animals such as whales that have become trapped in shallow waters, nudging them and vocalizing in an effort to lead them to safety. Unfortunately, millions of dolphins drown each year in tuna fishing nets, and man-made chemicals are believed to be compromising the immune systems of these exotic creatures.

With just 999 of these 2019 Dolphin Three-Ounce Silver Coins struck for worldwide release, demand is sure to exceed availability. Don’t let this one swim away – add one of these dolphins to your collection right now!

The anticipated demand from fans of exotic aquatic animals as well as collectors of unique coins means our supply of 2019 Dolphin Three-Ounce Silver Coins is sure to be exhausted quickly. Don’t let this be the one that got away, add it to your cart today!