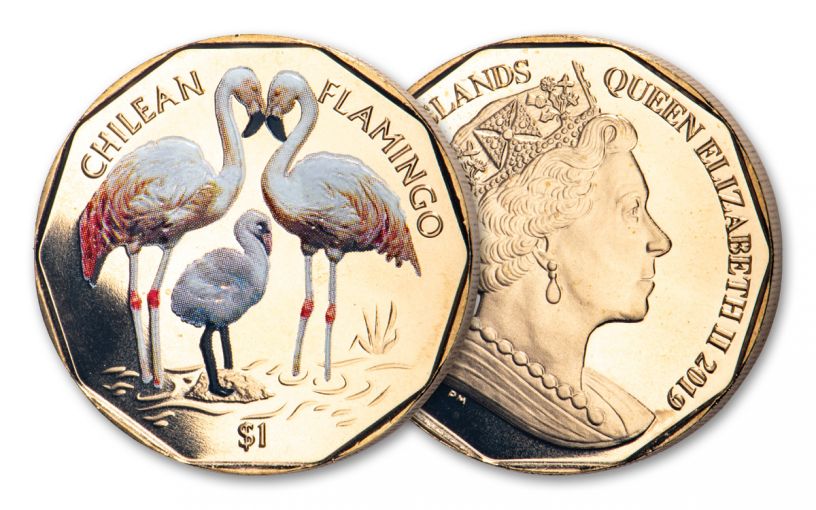 Availability: In Stock
This item will ship within 2 business days.
Item #
350526
Review this product
Add to Wish List Add to Wish List Wishlist is for registered customers. Please login or create an account to continue. Add to Compare
Complete your collection with one of these:
Product Description

Sometimes mistaken for its American cousin, the Chilean Flamingo is a tall social bird with thin legs, a long flexible neck and crimson highlights along the edges of its pink plumed wings. Another interesting fact about this exotic bird is its knees – well, actually, its “knees” are really its ankles and the joint bends backwards rather than forwards! To pay tribute to this beautiful creature, the British Pobjoy Mint is featuring the Chilean Flamingo in blazing color on the third coin of its series that showcases flamingos from around the world.

Featuring a romantic heart-shaped pair of adult birds with their chick standing between them in shallow water, the birds are expertly depicted in different shades of pink to create an image that perfectly reflects the beauty of the near-threatened species. The bright, brilliant colors are even more dazzling set against the exquisite light gold, brassy color of the coin. The color comes from the metal used to strike the coin, Virenium®, a proprietary metal specially developed by Pobjoy Mint that is light gold in color.

Perhaps the most famous Chilean Flamingo was a friendly chap who resided at Salt Lake City’s Tracy Aviary. Due to an oversight, the bird did not receive his routine wing clipping one year and escaped. He went on to become something of a local legend. Hailed as “Pink Floyd,” he roamed about Idaho and Montana during the spring, summer and fall, but returned to Utah each winter where he lived off the brine shrimp that inhabit the Great Salt Lake.

Released on behalf of the British Virgin Islands, this lovely coin comes in gorgeous Proof condition, meaning it was expertly crafted by the mint from hand-selected planchets, polished dies and multiple strikes to produce beautifully frosted details rising over mirror-like fields. Pobjoy is limiting the mintage to just 3,500 colorized proofs. Start or add to your collection today. Order one now!