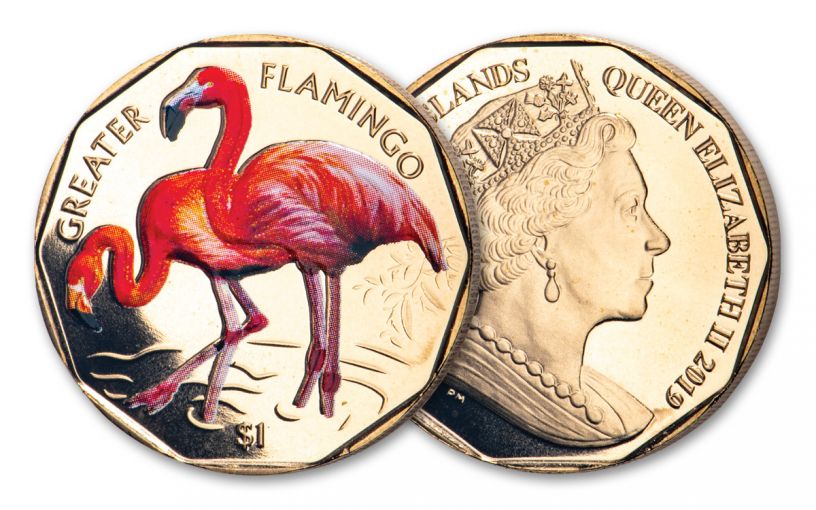 Availability: Out of Stock
This item is currently Out of Stock. Please sign up to be notified if this product becomes available.
Item #
350525
Add to Wish List Add to Wish List Wishlist is for registered customers. Please login or create an account to continue. Add to Compare

The largest and most widespread species in the flamingo family, Greater Flamingos usually live in flocks of 20,000 birds or more in Africa, India and the Middle East. For these birds, it’s a matter of safety in numbers, for while one bird may bury its head deep in the mud in search of tasty shrimp and vegetation to eat, dozens of other birds can keep an eye out for predators. To pay tribute to this beautiful creature, the British Pobjoy Mint is highlighting the Greater Flamingo in blazing color on the fourth coin of its series that showcases flamingos from around the world.

Featuring a pair of adult birds wading in shallow water, the birds are expertly depicted in deep shades of pink to create an image that perfectly reflects the beauty of this vibrantly colored species. The bright, brilliant colors are even more dazzling set against the exquisite light gold, brassy color of the coin. The color comes from the metal used to strike the coin, Virenium®, a proprietary metal specially developed by Pobjoy Mint that is light gold in color.

On June 27, 2005, a Greater Flamingo escaped from the Wichita Zoo. Branded a fugitive, it had only recently arrived from a colony in Tanzania and took flight when no one was looking. He was spotted as far north as Wisconsin and as far south as Texas where he met up with an American Flamingo that had escaped from a Mexican zoo. The pair mated for life and their story has since become a tale of love and loyalty as the two inseparable birds became a familiar sight in and around the Gulf of Mexico.

Released on behalf of the British Virgin Islands, this lovely coin comes in gorgeous Proof condition, meaning it was expertly crafted by the mint from hand-selected planchets, polished dies and multiple strikes to produce beautifully frosted details rising over mirror-like fields. Pobjoy is limiting the mintage to just 3,500 colorized proofs. Start or add to your collection today. Order one now!