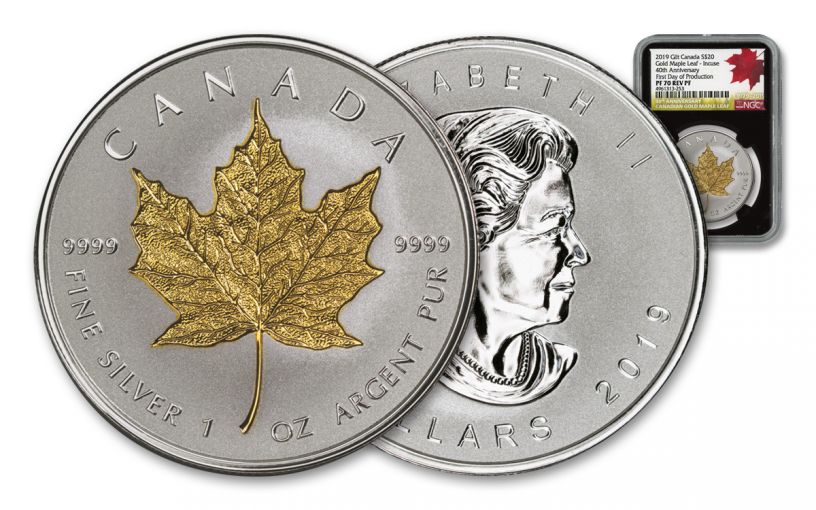 Availability: Out of Stock
This item is currently Out of Stock. Please sign up to be notified if this product becomes available.
Item #
349096
Add to Wish List Add to Wish List Wishlist is for registered customers. Please login or create an account to continue. Add to Compare

People have been preserving maple leaves for decades by either simply fusing them between two sheets of wax paper with an iron or by soaking them in a solution of liquid glycerin and water. Now, on the 40th Anniversary of Canada’s groundbreaking Gold Maple Leaf coin series, you can preserve one of the most beautiful Maple Leaves ever issued thanks to the Royal Canadian Mint’s first-ever Silver Incuse Maple Leaf with rose gold plating.

Struck in a full ounce of highly-pure 99.99% fine silver, this coin is not only an incuse coin, but a “Double-Incuse” coin with both the obverse and reverse sides featuring incuse elements that rest below the surface of the coin instead of above like most coins. This $20 Canadian Legal-tender coin displays the same iconic Maple Leaf design that collectors have come to know and love: a traditional Sugar Maple Leaf with detail so sharp that you can see every last vein in its bumpy contours. The addition of selective plating in 24-karat Rose gold further enhances and accentuates the gleaming design – a design made all-the-more unique thanks to its reverse proof finish. A reverse proof differs from a regular proof coin in that the fields are frosted and the raised portions of the coin are mirror-like. It’s a magnificent contrast!

And be careful not to miss one last added touch: the coin’s edge is a unique element unto itself with smooth edge lettering that breaks up the serrated edge in multiple locations. The lettering features a pair of Maple Leaves flanking the number “40” in honor of this important anniversary.

Your 2019 Canada One-Ounce Silver Incuse Gilt Maple Leaf Reverse Proof has been graded by the Numismatic Guaranty Corporation (NGC) as being in flawless Proof-70 Ultra Cameo (PF70UC) condition, a distinction that means your perfectly-graded proof will have ZERO imperfections – showing all features and fields exactly as the engraver and mint intended. In addition, NGC has graded your Silver Maple Leaf to be a First Day of Production (FDP) coin, meaning that it was struck on the first day that the mint began striking it. To qualify for First Day of Production, coins must be received by NGC or an NGC-approved depository accompanied by documentation from the mint that confirms that the coins were struck on the first day of that coin’s production. It will come sonically sealed in an acrylic holder with a white display core and an exclusive Gold Maple Leaf 40th Anniversary label.

Just 5,000 of these all-INCUSE-ive silver proofs were struck for worldwide release – and even fewer are available certified as First Day of Production coins! With such a small number for such a big anniversary, demand is likely to exceed supply. So put away the iron and the craft paper and add this Maple Leaf to your collection today by simply clicking it to your cart!

Celebrate the 40th anniversary of the Gold Maple Leaf with the first-ever Canada One-Ounce Silver Gilt Double Incuse Maple Leaf Reverse Proof. Don’t miss your chance to get one. Reserve yours now!