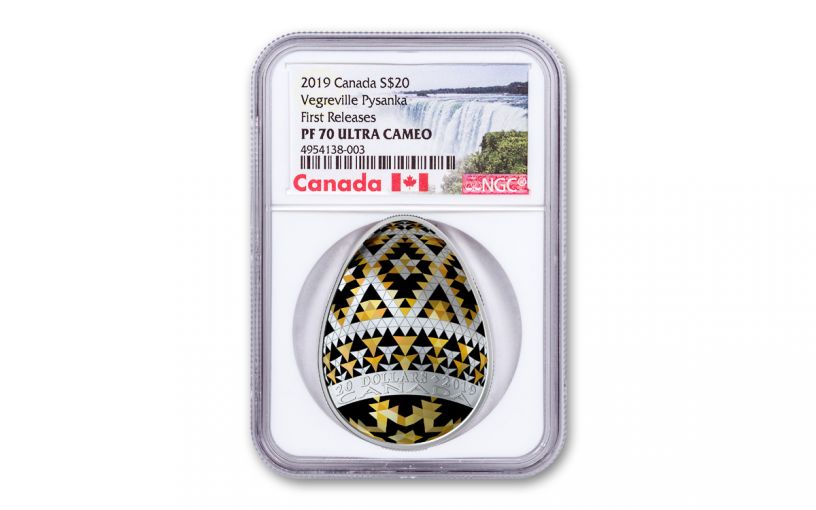 Availability: Out of Stock
This item is currently Out of Stock. Please sign up to be notified if this product becomes available.
Item #
346220
Add to Wish List Add to Wish List Wishlist is for registered customers. Please login or create an account to continue. Add to Compare

Collectors Will Be Scrambling to Get Their Hands on This Egg!

The United States may have the world’s Largest Ball of Twine, but Canada has its Pysanka Egg! Located in Vegreville, Alberta, the humongous sculpture stands three-and-a-half stories high, is 31 feet long and weighs more than two-and-a-half tons. Imagine the omelette that baby could make! Now this impressive sculpture serves as the design for the latest coin in the Royal Canadian Mint’s immensely popular annual series that pays tribute to Pysanka Easter Eggs.

Struck in a full ounce of 99.99% fine silver, this year’s Pysanka Egg coin has been selectively colorized to perfectly mimic the gigantic original in Vegreville that attracts thousands of tourists each year. The colossal egg was even visited in 1978 by Her Majesty Queen Elizabeth II and Prince Philip, Duke of Edinburgh.

The 45 x 33 mm egg-shaped legal-tender proof features shades of gold and black in an intricate pattern consistent with traditional Pysanka Easter eggs from Ukraine. As home to one of Canada’s largest Ukrainian settlements, Vegreville was a fitting spot for the jumbo-sized egg that also serves as the center of an annual Pysanka Festival held each year during the first week of July. During the festival, ethnic dancing, instrumentalists, bands, singers, a market, and folk arts are held – including, of course, demonstrations on how to make Ukrainian Easter eggs.

Your Vegreville Pysanka Easter Egg coin has been graded by the Numismatic Guaranty Corporation (NGC) as being in flawless Proof-70 Ultra Cameo (PF70UC) condition, a distinction that means your perfectly-graded proof will have ZERO imperfections – showing all features and fields exactly as the engraver and mint intended. In addition, NGC has graded your proof to be a First Releases (FR) coin, a designation that means it was received by NGC or an NGC-approved depository within the first 30 days of the its release. It will come sonically sealed in an acrylic holder with a special Canada label.

The 2019 Canada Vegreville Pysanka Egg One-Ounce Silver Proof is a piece unlike any in your collection. And, since all previous Pysanka coins been complete sell-outs have at the Mint, the time is now to order this year’s Pysanka Egg coin before they’re all gone! Each will come in its original government packaging from the mint. Click one to your cart today!

Just 5,000 of these spectacular coins were issued – and based on past history, the mint is already predicting a sell-out. Act fast to put some of these Easter eggs in your basket or you’ll be left scrambling to hunt one up later!