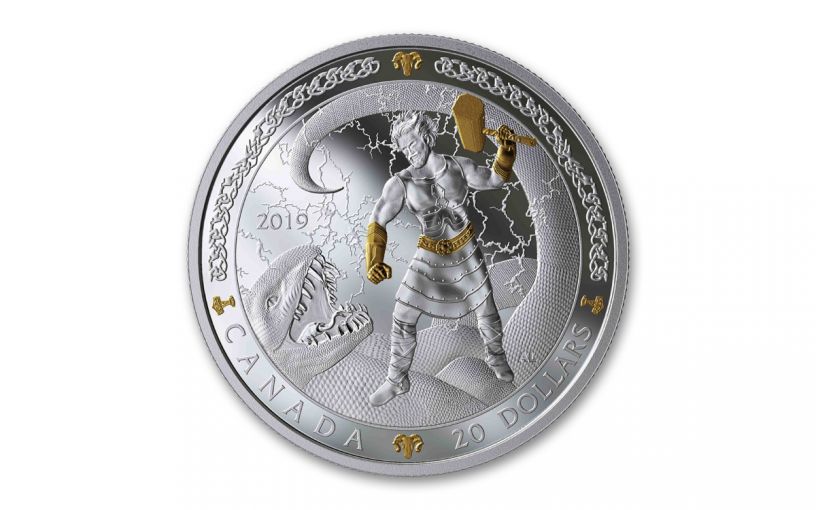 Availability: Out of Stock
This item is currently Out of Stock. Please sign up to be notified if this product becomes available.
Item #
346153
Add to Wish List Add to Wish List Wishlist is for registered customers. Please login or create an account to continue. Add to Compare

Step aside Chris Hemsworth, the REAL God of Thunder has arrived! Thanks to a fascinating new series released by the Royal Canadian Mint, the traditional image of Thor from Norse mythology returns on a spectacular pure silver coin selectively plated in 24-karat gold.

While Hemsworth’s chiseled good looks and rippling muscles have come to define Thor thanks to his myriad appearances as the character in the Marvel Cinematic Universe, the Thor from old Norse legends is quite different. Sure, he carries with him Mjölnir, his mountain-crushing hammer, but that’s kind of where the similarities end. As shown on this coin struck in one ounce of 99.99% silver, there’s more to Thor than just his hammer. You can also see his power belt, Megingjörð, which gives him superhuman strength, and his iron gauntlets, Járngreipr, which allow him to wield his mighty hammer. These are Thor’s weapons and he uses all of them on this coin to battle Jörmungandr, the Midgard Serpent. Each weapon is plated in 24-karat gold to make them stand out form the coin’s gleaming silver surface.

If you look closely, you’ll also see a pair of goat heads at the top and bottom of the coin. Those figures represent Tanngrisnir and Tanngnjóstr, a pair of enchanted goats who pull Thor’s chariot. These mystical beasts also sustain Thor in his many journeys as he can eat them each night and bring them back to life the next morning. On the left and right side of the coin you’ll see hammers based on a 10th-century silver pendant that are also plated in gold.

Your 2019 Canada Norse Gods – Thor One-Ounce Silver Coin will come in gorgeous Gem Proof condition, meaning it was expertly crafted by the mint from hand-selected planchets, polished dies and multiple strikes to produce beautifully frosted details rising over mirror-like fields. It will come beautifully displayed in its original government packaging from the mint – a maroon clamshell case with a black velvet interior.

As the first release in Canada’s Norse Gods series, these One-Ounce Silver Thor Proofs are sure to be in demand by coin collectors, students of Norse mythology and silver stackers everywhere. But with a limited edition of just 3,500 there just isn’t enough to go around. Hurry and order yours now before the end times of Ragnarök descend on Thor and ends his final battle with the Midgard serpent. Hammer one home to your cart today!

It’s “hammer” time at the Royal Canadian Mint with these exciting One-Ounce Silver Thor Proofs, so don’t forget to click one of these impressive coins to your cart!