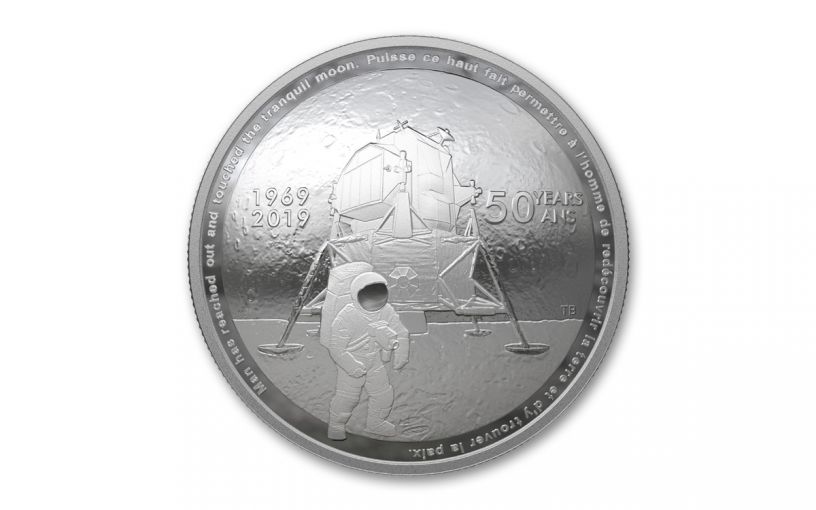 Availability: Out of Stock
This item is currently Out of Stock. Please sign up to be notified if this product becomes available.
Item #
351406
Add to Wish List Add to Wish List Wishlist is for registered customers. Please login or create an account to continue. Add to Compare
Product Description

This Apollo 11 Silver Proof is a Commemorative That Has Some Real Legs to It!

While there’s no question that American moxie, guts and ingenuity were the main factors to Apollo 11 being the first manned mission to the moon, the Herculean task was aided in no small part by a group of Canadian engineers who played a vital role in delivering the American astronauts to the lunar surface on July 20, 1969. In fact, even before Neil Armstrong made his famous small step for man, the lunar landing module’s Canadian-made legs had settled into the moon’s bleak and dusty surface.

To pay tribute to its often-overlooked contribution, Canada has released a magnificent series of Apollo 11 Moon landing 50th Anniversary coins that honor both the American mission and its astronauts as well as the Canadian contribution that helped get them to the moon – and back! Struck by the world-renowned Royal Canadian Mint in a full ounce of 99.99% pure silver, this incredible dome-shaped coin features an astronaut hopping across the moon’s surface while the lunar lander rests safely in the background. The astronaut’s right leg seems about to step off the coin’s upward-curved surface as if he’s about to take a giant leap into the unknown!

Around the rim of the coin an inscription reads: “Man has reached out and touched the tranquil moon” in English, and “May the discovery of this high place make it possible for man to find peace on Earth” in French. The design is completed by the dual dates of 1969 and 2019 and 50th Anniversary. The coin’s deep bowl-like obverse features a portrait of Queen Elizabeth II at the bottom along with the issuing country, and $25 denomination around the rim. Your coin will also arrive in its original government packaging from the mint.

Just 5,500 of these beautifully struck proof coins have been issued for worldwide release – a number that seems far too small for all the Canadian collectors who would like to own this fabulous proof, let alone everyone across the globe craving to get their hands on one! An anniversary commemorating an event of this magnitude may come around perhaps once in a lifetime. This is your chance to be part of it by adding one of these 2019 Canada One-Ounce Silver Apollo 11 Domed Proofs to your cart right now!