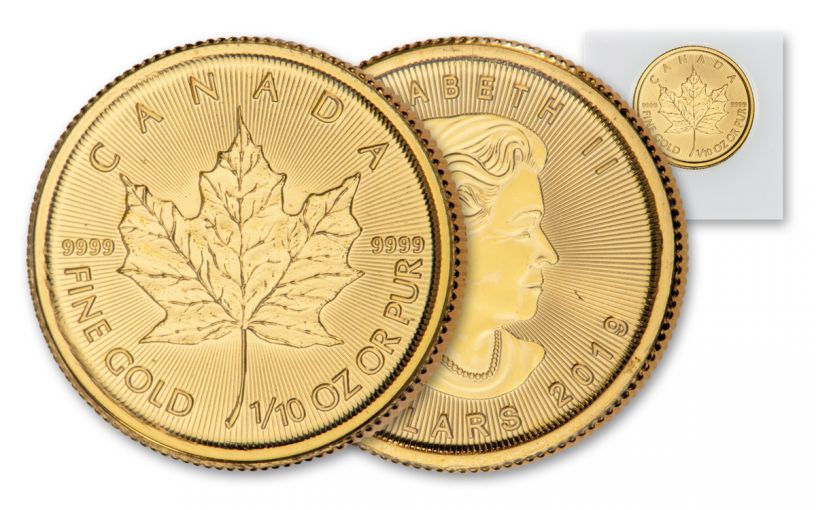 Availability: Out of Stock
This item is currently Out of Stock. Please sign up to be notified if this product becomes available.
Item #
342521
Add to Wish List Add to Wish List Wishlist is for registered customers. Please login or create an account to continue. Add to Compare
Related Articles
Product Description

Lordy, Lordy, look who’s 40! It’s Canada’s Gold Maple Leaf and the historic occasion is sure to excite eager collectors wishing to add the newest installment of the numismatic masterpiece to their collections. When the Gold Maple Leaf was first issued in 1979, the only other gold bullion coin in the world was the Krugerrand, which at that time was extremely difficult to obtain due to an economic boycott of South Africa because of its apartheid-era policies.

Long before it made its way onto Canada’s coins, the distinctive image of a maple leaf has been the nation’s identifying image since the 1700s. Standing front and center on the Canadian flag since 1965, it signifies pride, connection and community. Since its debut on the country's signature gold bullion coin in 1979, the Gold Maple Leaf has become one of the world’s most iconic and instantly recognizable coins. The acute attention to detail on these coins is simply unparalleled! Now you can start or add to your collection of Maple Leaf coins by bringing home the 2019 installment of this beloved series!

Struck at the prestigious Royal Canadian Mint in a tenth ounce of highly-pure 99.99% fine gold, the Gold Maple Leaf earns its name from the incredibly detailed maple leaf that graces its reverse. In addition to the maple leaf, the word “CANADA” arches over the image, while the coin’s purity, “9999,” is inscribed on both sides of the leaf. An inscription along the bottom half of the rim reads, “FINE GOLD 1/10 OZ OR PUR.” A background finish of radial line serves to thwart any would-be counterfeiters, as does a micro-engraved mint mark – a small leaf, engraved with the number “19” – that provides further security. The coin’s obverse features the regal portrait of Queen Elizabeth II along with the “5 DOLLARS” legal-tender denomination and the 2019 year date.

Your coin has also been vacuum-sealed in plastic immediately after production and quality control at the Royal Canadian Mint, so you are receiving it in the same Gem Brilliant Uncirculated (BU) condition that it was in when it left the mint! So, whether you’re an avid Gold Maple Leaf collector, a dedicated gold bug, or someone who just loves collecting anything Canadian, this deal is for you! Add one – or several – of these Brilliant Uncirculated (BU) beauties to your cart today!

For nearly four decades, collectors have clamored over each new annual release of Maple Leafs. 2019’s golden class is already looking to command just as strong of demand. Don’t wait to get yours; order one for your collection today!