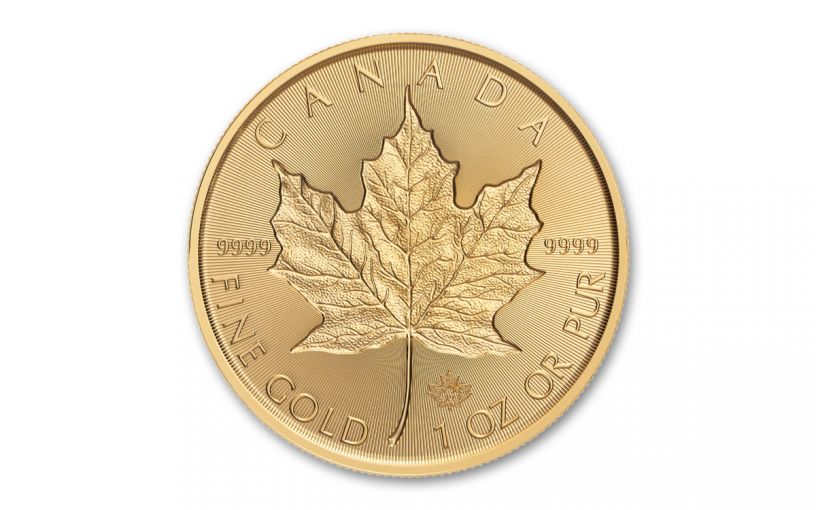 Availability: Out of Stock
This item is currently Out of Stock. Please sign up to be notified if this product becomes available.
Item #
347702
Add to Wish List Add to Wish List Wishlist is for registered customers. Please login or create an account to continue. Add to Compare
Product Description

Go Under the Surface With These First-Ever Gold INCUSE Maple Leafs!

Canada's famous Gold Maple Leaf bullion coins have been a hit with collectors ever since their debut in 1979. And, in the forty years since it made its first appearance, this iconic coin's design has remained relatively intact. Sure, as time goes by, Queen Elizabeth II's profile has reflected the passing years. And as minting technology becomes more advanced, the leaf itself has become more detailed and its surroundings more intricate to foil forgers. But on the whole, this coin has withstood the transitory trends of time. It seems that the only direction this design can go is down . . . beneath the surface, that is!

To herald the series' 40th anniversary, the Royal Canadian Mint is introducing the first ever INCUSE Gold Maple Leaf! For this special release, both the titular maple leaf design on the reverse AND the profile of Queen Elizabeth II on the obverse are sunk into the coin, their textures reaching just below the lustrous field. Taking its cue from ancient coins all the way up to the storied U.S. Indian Head Half Eagles and Quarter Eagles of the early 20th century, these Gold Maple Leafs proudly bring incuse minting techniques into a gorgeous new era!

These first-ever Gold Incuse Maple Leafs come on the heels of 2018’s wildly successful first-ever Silver Incuse Maple Leafs. The silver coins quickly sold out and we’re expecting a similar demand for these gold coins. With a limited mintage of just 10,000 – compared to 250,000 one-ounce Incuse Silver Maple Leafs – it doesn’t look like there will be enough to go around. Don’t miss out, click one to your cart today!

Whether you're a long-time fan of the series or new to the party, a bonafide gold bug or a numismatic nut, this stunning Gold Incuse Maple Leaf is a must-have for your collection! Just don't take too much time deciding how many you want -- we're expecting demand for this debut to be massive! Join the celebration and get yours now!