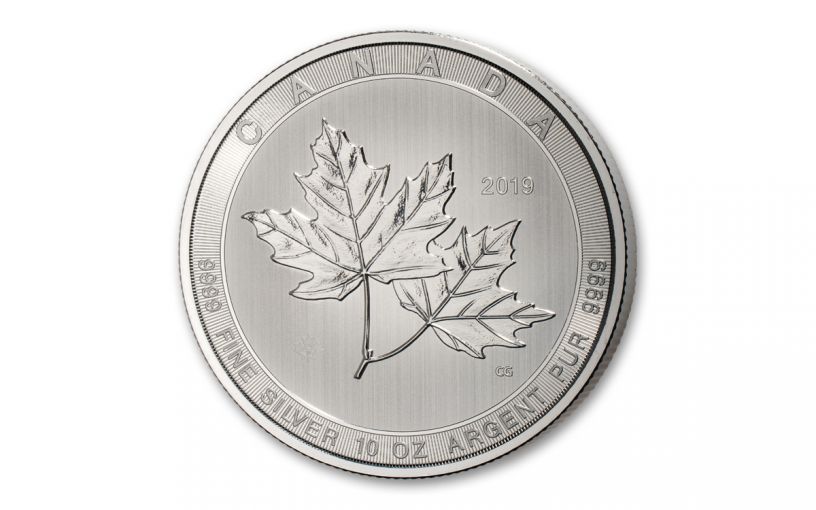 Availability: Out of Stock
This item is currently Out of Stock. Please sign up to be notified if this product becomes available.
Item #
346827

Collectors Are Lining Up to Rake in These Magnificent Maple Leaves

You may have heard about Canada’s Maple Syrup War where the Federation of Quebec Maple Syrup Producers has not only taken control of 72% of the world’s supply of maple syrup, but is charging $1,300 a barrel. But there’s a new, friendlier “war” going on north of the border as well. It’s between the Royal Canadian Mint’s traditional Maple Leaf coins and its new upstart series, the Magnificent Maple Leaves. And in this contest the winner is you!

First issued in 2017, Canada’s Magnificent Maple Leaves series is similar yet separate from the Silver Maple Leaf series and features its own unique double maple leaf design. What really makes these coins stand out, however, is their size. At 76.25 mm in diameter, each is a massive coin struck in 10 troy ounces of 99.99% silver. And, with a face value of $50, this is the highest denomination ever made available on a legal-tender Canadian silver bullion coin.

The new design will leave your breathless. The image by Canadian artist Celia Godkin features two sugar maple leaves elegantly designed so that their stems come together on one twig at the bottom of the image. Thanks to the Ten-Ounce Magnificent Maple Leaf Silver Coin being one of the largest coins ever released by the Royal Canadian Mint, the design with its precision engraving and variety of textured depths stands out in an extraordinary way.

Collectors of Canadian coins and silver stackers are sure to rake in these leaves as fast as they can. It may sound syrupy, but in this Maple Leaf “war,” you are the winner – but only if you order your 2019 Canada $50 Magnificent Maple Leaf Ten-Ounce Silver Coin today!

The 2019 Canada $50 Magnificent Maple Leaves Ten-Ounce Silver Coin is a silver stacker’s dream – and if you don’t secure yours soon you may be left dreaming of ever acquiring these coins at these prices ever again. Put one in your cart now!