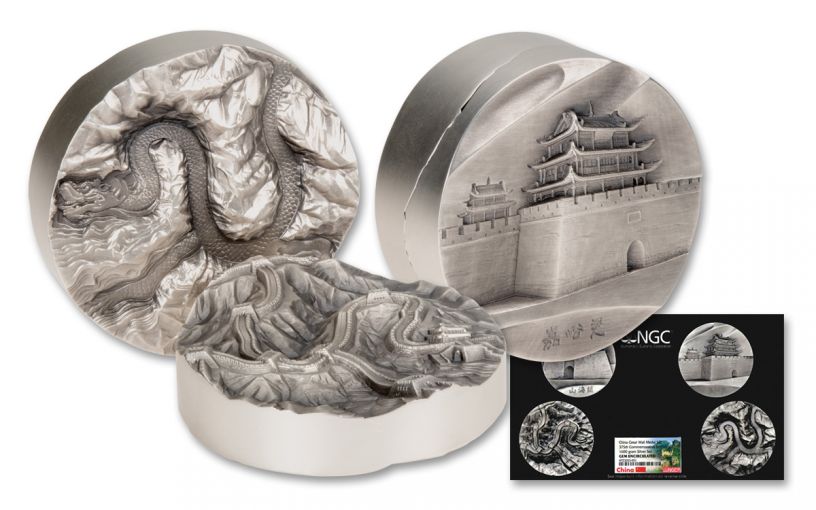 Availability: Call-In Only
This item is only available on a Call-In basis. Please call 1-800-510-6468 to speak to a representative.
Item #
345642
Add to Wish List Add to Wish List Wishlist is for registered customers. Please login or create an account to continue. Add to Compare

Hold the Great Wall of China in Your Hands!

Even in its earliest stages, the wall was planned to be built not just to stem the tide against immigration, but to help regulate trade and to provide a safeguard against raids and invasions. No, we’re not talking about the plans to build a border wall between the United States and Mexico, it’s the Great Wall of China, hailed today as one of the greatest architectural achievements in human history. To truly pay tribute to such a massive undertaking one would need a really massive commemorative – and this is it!

Struck to commemorate the 375th anniversary of the Great Wall of China’s completion in 1644, this two-piece set brings together two colossal medallions struck in highly-pure 99.9% fine silver to create an eye-popping piece of numismatic art that’s sure to be the center of attention wherever it’s displayed. Measuring a whopping 80 mm in diameter and weighing in at 1,600 grams when combined – more than 3.5 pounds! – the set’s two interlocking medals create a king-sized piece that’s more than an inch thick!

But that’s just the start! When separated, one medal features the raised section of China’s Great Wall built between two passes – the famous Shanhai Pass and Jiayu Pass, one of the most treacherous sections in the entire length of the wall. The second medal features a similarly mountainous topography, but with the shape of the wall indented to give additional detail that takes the form of a winding dragon emulating the Yellow River. The ultra-high relied detail is simply extraordinary! In fact, each medal will come in Gem Uncirculated condition, meaning that they are the products of superb strikes that place them firmly among the elite of the run.

But here’s the catch: These medallions were originally intended only for Chinese collectors and were never meant to be made available for foreign markets. Kept relatively secret, you’d have had to have all the guile and stealth of one of the scouts from the army of Genghis Khan to have even heard about this release much less secure one for your collection! But now, for the first time ever, its available in the United States in what is likely to become a highly coveted collectible both now and for years to come!

With just 399 of these Silver Great Wall Anniversary Two-Piece sets available for worldwide release you’ll need to act fast before this stunning release is gone for good. Don’t delay, click one to your cart right now!

Don’t miss your chance to hold a piece of the Great Wall of China in your hands – secure one of these 2019 China Great Wall Anniversary Silver Two-Piece Sets now while they’re still available!