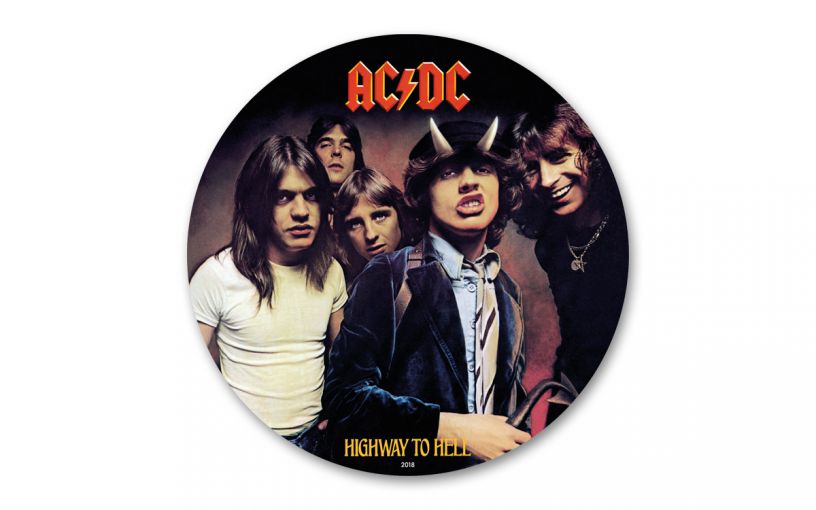 Availability: In Stock
This item will ship within 2 business days.
Item #
361954
Add to Wish List Add to Wish List Wishlist is for registered customers. Please login or create an account to continue. Add to Compare

A Silver Coin That’s Better Than a Gold Record

In 1979 when Australian rock band AC/DC was set to release its album Highway to Hell, it was met with resistance from record company executives who feared the title would create a sales-dropping backlash. According to guitarist and founding member Angus Young, however, the title had nothing to do with horned red devils and boiling pits of sulfur. Instead, it was meant to reflect life touring on the road with a rock ‘n roll band where one slept in a smelly, cramped tour bus with “the singer’s feet two inches from your nose.”

To pay tribute to the 40th anniversary of the band’s breakthrough album, the world-famous Mayer Mint struck this amazing silver foil coin that features a full-color depiction of the seminal album sleeve depicting the scruffy looking band mugging for the camera with Angus Young decked out in horns and a pointy tail. Issued on behalf of the Cook Islands, this $2 legal-tender coin was struck in a half ounce of highly pure 99.9% fine silver and measures more than 6½ inches in diameter— nearly the same size as the old 45s we used to play on our turntables way back when.

Featuring such classics as the title song and the rockers “Shot Down in Flames,” “If You Want Blood (You've Got It)" and “Touch Too Much;” the album put AC/DC on the map becoming the band’s first LP to break the US Top 100 and selling more than 7 million copies in the United States alone. This coin not only commemorates the 40th anniversary of AC/DC’s breakthrough hit but was struck in beautiful Proof-Like (PL) condition with a brilliant and reflective finish. Plus, each coin will come in packaging that’s meant to look like the original album sleeve!

Just 1,973 of these gorgeous silver foil notes were struck for worldwide release — one each for the year AC/DC was formed by brothers Angus and Malcom Young in New South Wales, Australia. That’s an incredibly small edition for such a popular band. But you don’t have to go through Hell to get one; simply click one to your cart today!

STRUCK IN HIGHLY PURE SILVER – Each 2019 Cook Islands Silver AC/DC Highway to Hell Foil Record coin was struck in a half ounce of highly pure 99.9% fine silver and measures 168 mm in diameter.

Better than a gold record, this 2019 Cook Islands Half-Ounce Silver AC/DC Highway to Hell Foil Record coin is the perfect addition to your music collection. Order yours now before these platters are all gone!