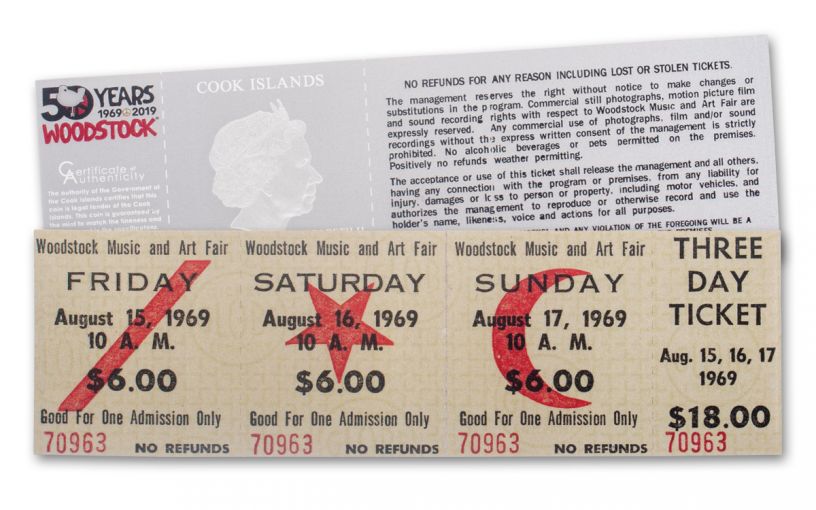 Availability: Out of Stock
This item is currently Out of Stock. Please sign up to be notified if this product becomes available.
Item #
339713
Add to Wish List Add to Wish List Wishlist is for registered customers. Please login or create an account to continue. Add to Compare

If You Remember Woodstock, You Weren’t There

Woodstock! Just the name of this four-day festival in 1969 immediately evokes powerful images of music and culture – along with furious downpours and young concert-goers cover in mud from head to toe. More than half a million people packed into the 600-acre dairy farm in the Catskill Mountains to hear the likes of Joan Baez, Janis Joplin, The Grateful Dead, Jimi Hendrix and more. Since many who were there have only fuzzy memories of the event, we hope to clear things up with this incredible recreation of an original 1969 Woodstock Music and Art Fair ticket, reproduced in approximately one fifth-ounce of 99.9% fine silver! This legal-tender dollar celebrates Woodstock’s 50th anniversary and belongs in every former hippie’s collection – or for that matter, any fan of rock music! Only 1,969 exist, so secure yours now before they’re history!

The 2019 Cook Islands $1 Silver Woodstock 1969 Ticket is the perfect keepsake to recall the summer of ’69 when the music of Woodstock defined a generation. Click one of these gleaming proof-like tickets to your cart today before they’re all sold out!