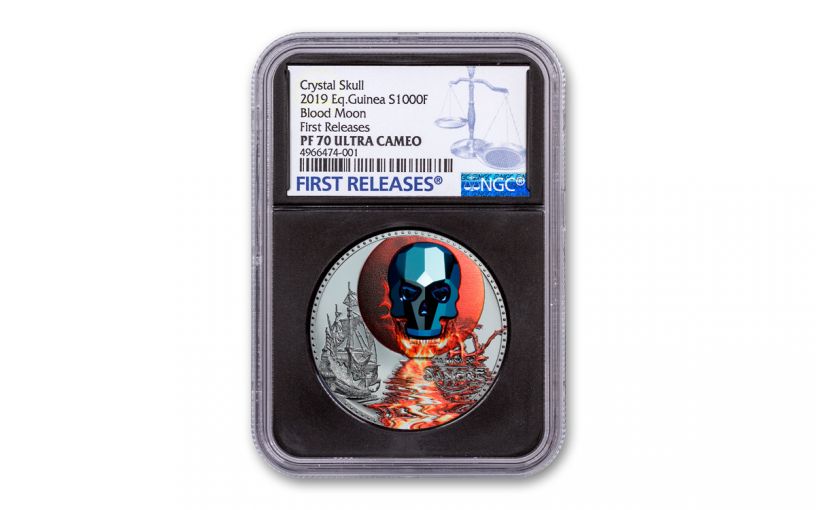 Availability: Out of Stock
This item is currently Out of Stock. Please sign up to be notified if this product becomes available.
Item #
347724
Add to Wish List Add to Wish List Wishlist is for registered customers. Please login or create an account to continue. Add to Compare
Product Description

During the Golden Age of Piracy, Spanish treasure ships were tempting morsels for such legendary rogues as Bartholomew Roberts, Henry Morgan, Captain Kidd, Calico Jack Rackham and Edward Thatch, better known as the infamous Blackbeard. These seafaring scoundrels terrorized the Caribbean for decades; plundering ships, carousing in seedy port cities and engaging in such nefarious activities as making prisoners walk the plank. This colorful era returns as the second release in the popular Crystal Skull series.

Struck by Coin Invest Trust (CIT) in one ounce of highly-pure 99.9% silver, the theme, finish, relief and manufacturing process all combine to make this release one of the most exotic coins of the year and a must-have for anyone’s collection of scarce and limited-edition pieces. This year’s ominous-looking coin is entitled La Luna de Sangre – Spanish for “Blood Moon.” The design shows a pirate ghost ship complete with torn and tattered sails sailing in red-colored waters while an enormous Blood Red moon hovers just above the distant horizon. Even the color of the coin is unique thanks to a processing technique called “Black Proof,” that creates a luxurious black finish on the surface of the coin.

What really sets this coin apart is the magnificent Crystal Skull. Emblazoned by the fiery color of the Blood Moon is a skull that juts out from the surface of the coin. This is no ordinary skull, however. It’s actually a blue Swarovski® crystal intricately inlayed into the coin itself! The magnificent shimming crystal skull is perfectly contrasted by the colorized jaw that is struck in high relief using CIT’s patented smartminting© technology.

Your 2019 Crystal Skull One-Ounce Colorized Silver Proof was graded by the Numismatic Guaranty Corporation (NGC) as being in flawless Proof-70 Ultra Cameo (PF70UC) condition, a distinction that means your perfectly-graded proof will have ZERO imperfections – showing all features and fields exactly as the engraver and mint intended. In addition, NGC has graded your Crystal Skull Proof to be a First Releases (FR) coin, a designation that means your coin was received by NGC or an NGC-approved depository within the first 30 days of its release. It will come sonically sealed in an acrylic holder with a black display core.

Issued on behalf of Equatorial Guinea, these legal-tender 1000-Franc Proofs effectively merge gloomy themes with sparkling Swarovski crystals to create an eerily beautiful coin unlike any other we’ve seen. Capture the beauty of the coins forever by adding one to your cart today!

The sanguinary theme on these 2019 Crystal Skull One-Ounce Colorized Silver Proofs has already made them a collector favorite. And with an unbelievably small edition limit of only 1,750, these wildly exotic coins will sell fast!