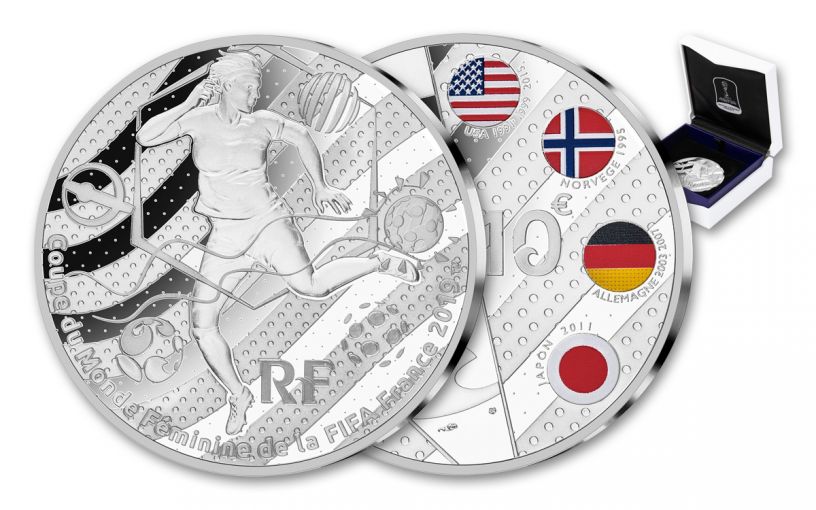 Availability: Out of Stock
This item is currently Out of Stock. Please sign up to be notified if this product becomes available.
Item #
347924
Add to Wish List Add to Wish List Wishlist is for registered customers. Please login or create an account to continue. Add to Compare

The Most Coveted Prize in Sports, Immortalized in Silver!

Millions dream of it, but only one team can claim it – the FIFA World Cup! Every four years, fans around the globe make the World Cup Finals the most popular sports event on the planet. This 90% fine silver proof commemorates the 2019 Women’s World Cup and displays the flags and years of previous winners – the top being the USA team, with three titles won in 1991, 1999 and 2015.

Without a doubt, the United States Women’s National Soccer Team (USWNT) is the most successful international women’s team in the world. Team USA has never placed lower than third in the FIFA (Fédération Internationale de Football Association) World Cup, has won four Olympic Gold Medals, eight CONCACAF (Confederation of North, Central American and Caribbean Association Football) Gold Cups, and 10 Algarve Cups. It was ranked No. #1 in the world continuously from 2008 to 2014. Currently the top-ranked team in the world, expectations are once again high for the Americans at this year’s World Cup.

Show your support for Team USA and score one of these fabulous silver coins. But you’d better hurry; the world-renowned Monnaie de Paris (The Paris Mint) is releasing only 5,000 of these 10 Euro legal-tender coins in commemoration of France playing host to this year’s tournament. No fancy footwork is required to secure yours – just click it to your cart!

Don’t let other collectors swerve around you and beat you to these coins. Score one now while we still have quantity in stock!