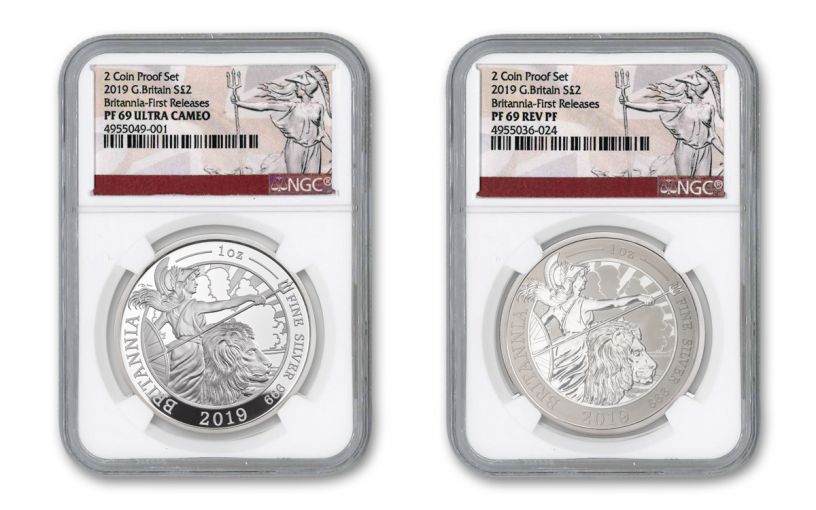 Availability: Out of Stock
This item is currently Out of Stock. Please sign up to be notified if this product becomes available.
Item #
348959
Add to Wish List Add to Wish List Wishlist is for registered customers. Please login or create an account to continue. Add to Compare

Following their conquest of the British Isles in 43 A.D., the Romans named their new province “Britannia” – a Latinisation of Pretanī, the native word for the island. With that name came the female personification of the island, a warrior goddess armed with a trident, shield and Corinthian helmet. While Great Britain continues to change and evolve, the figure of Britannia still stands tall, representing the ideals of pride, fortitude and progress. In 2019, Britannia reigns supreme once again on the Royal Mint’s latest Britannia Proof Series that features a new, one-year-only design.

Great Britain’s Royal Mint introduced its premier Gold Britannia bullion series in 1987 and followed it up 10 years later with the Silver Britannia series in 1997. Today, the Britannia coins are among the most premier names in precious metal coinage. And while the bullion edition of the Britannia has kept its same design since 2013, each year brings an exciting new design to the Britannia Proof releases – and this year is no different! With a new contemporary design by one of England's rising young artists, we're proud to bring you this 2019 Great Britain Britannia One-Ounce Silver Proof & Reverse Proof Two-Piece Set!

The two coins in your set include:

Each coin in your 2019 Britannia Silver Proof & Reverse Proof Two-Piece Set has been graded by the Numismatic Guaranty Corporation (NGC) as being in near-perfect Proof-69 Ultra Cameo (PF69UC) condition, a distinction that means your almost-flawless coin will showcase an impressive full strike and indistinguishable imperfections – well above and beyond the quality of the vast majority of coins in the series! In addition, NGC has graded each coin in your set to be a First Releases (FR) coin, a designation that means they were received by NGC or an NGC-approved depository within the first 30 days of their release!

Like the others that came before it, the 2019 Britannia proof coins both establish and reimagine an enduring symbol of British strength. Whether you're new to the Britannia series or a longtime collector, coin fanatic or Anglophile, this vision is one worth bringing home. And with so few of these sets available for worldwide release, you’ll need to act fast to guarantee you get one! Don't miss this opportunity – order yours today!

Britannia, the embodiment of a nation and icon of maritime sovereignty, has symbolized Britain for centuries, appearing on coins dating all the way back to the Roman Empire! This favorite of collectors around the world is met with high demand year after year. Don't miss out on this chance to secure the extremely limited-edition 2019 Great Britain Britannia Silver Proof & Reverse Proof Two-Piece Set – order yours today!