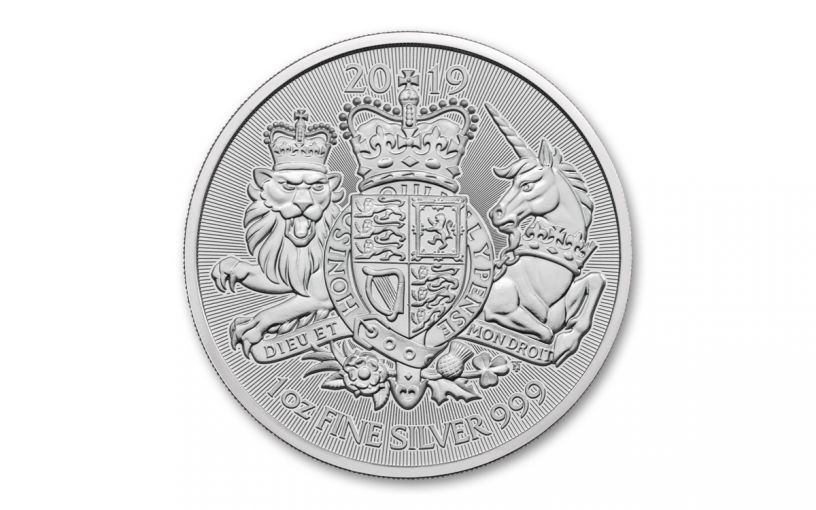 Availability: Out of Stock
This item is currently Out of Stock. Please sign up to be notified if this product becomes available.
Item #
348857
Add to Wish List Add to Wish List Wishlist is for registered customers. Please login or create an account to continue. Add to Compare
Related Articles
Product Description

A Coin With the British Monarchy’s Seal of Approval

With a history dating back to King Richard the Lionheart more than 800 years ago, the United Kingdom’s Royal Arms are rich with all the pomp and pageantry one would expect from a monarchy that has brought us such famous rulers as Henry VIII, Elizabeth I, Victoria and Queen Elizabeth II. Now, as a testament to the popularity of that rich tradition, the British monarchy’s historic and symbolic Royal Coat of Arms is assuming the mantle on an exciting new annual series of bullion coins released by The Royal Mint.

Struck in one ounce of highly-pure 99.9% fine silver, these legal-tender £2 (two pounds) coins boldly display the Royal Arms – the official Coat of Arms of Queen Elizabeth II. The coin’s design features a quartered shield bearing the three lions of England, the rampant lion of Scotland and the harp of Ireland. The shield is surmounted by the Royal Crown and supported by a crowned English Lion on one side and the Scottish Unicorn, held firmly in chains, on the other side.

Surrounding the shield is the inscription “HONI SOIT QUI MAL Y PENSE” – the motto of the Order of the Garter, which translates to “shame on him who thinks evil of it.” Below is a rose, thistle and shamrock, representing England, Scotland and Ireland respectively. This contemporary version is unusual in that it also includes the leek of Wales, an onion-like root vegetable that has been worn by royal guards on Saint David’s Day since the days of the Tudor dynasty in honor of the patron saint of Wales.

At 38.61 mm in diameter, this gleaming Brilliant Uncirculated (BU) bullion coin deftly captures the illustrious history and majesty of the British monarchy in exquisite detail. As a first-year-of-issue coin, it’s sure to be popular among collectors. Plus, Royal watchers and silver stackers will all be queuing up to get their share of the release. Make sure you get yours; add one – or several – of these coins to you cart today!

Stock up on British silver with the 2019 Great Britain Royal Arms One-Ounce Silver Coin – the first coin in a new bullion series from The Royal Mint. Order one – or several – of these beautiful coins today!