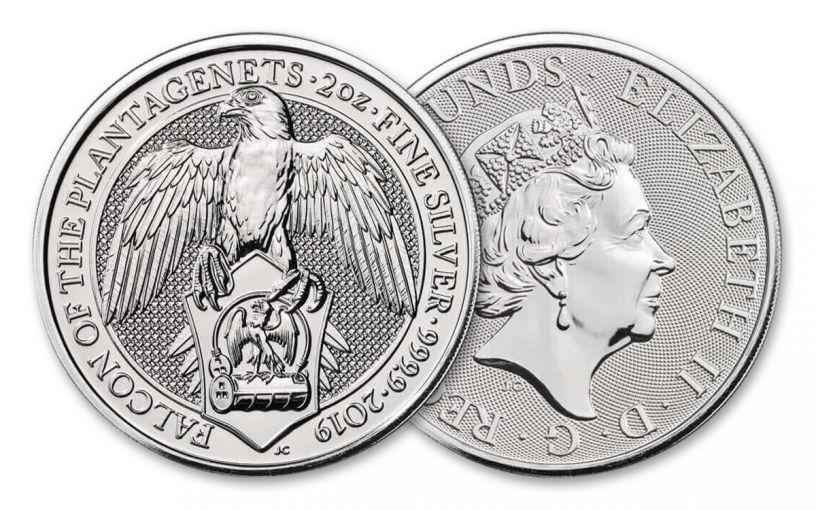 Availability: Out of Stock
This item is currently Out of Stock. Please sign up to be notified if this product becomes available.
Item #
340387
Add to Wish List Add to Wish List Wishlist is for registered customers. Please login or create an account to continue. Add to Compare
Product Description

To honor these royal protectors and celebrate the reign of Queen Elizabeth, The British Royal Mint has released a series featuring The Queen’s Beasts -- ten coins for the ten creatures that stood guard outside her coronation ceremony on June 2, 1953. The sixth coin in this release is the Falcon of the Plantagenets, a symbol of the powerful King Edward III, who chose the symbol to embody his love of hawking.

Here’s your chance to bring the Queen’s Beasts Falcon home in a two full ounces of 99.99% silver, with a reverse designed by the talented Jody Clark, Royal Mint Engraver and designer of the current effigy of Queen Elizabeth II. Your coin has a legal-tender value of £5 (five pounds) and comes in gleaming Brilliant Uncirculated (BU) condition, meaning it is as fresh and crisp as the day it left the mint. This wonderful coin and its exciting designs are breathtaking – it’s no wonder each entry of the Queen’s Beasts series has proven incredibly popular. Don’t wait for our supply to fly away, order yours today!